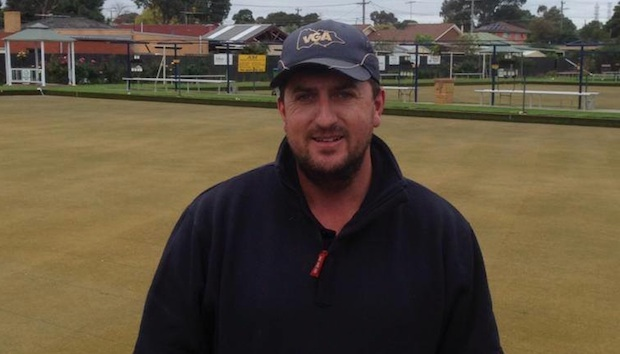 VGA Treasurer, Dyson Appleyard has just come off a busy greenkeeping season down at Bundoora. Now instead of putting his feet up, he will be keeping his head down to help plan the next few events for the VGA. After egging on Phil Grant to take part in the 21 questions, we thought it was only fair to make Dyson do the same!

Name: Dyson Appleyard
Place of work and position:  Bundoora RSL Bowling Centre, I’m the full time greenkeeper.
How long have you been in the industry & background?: I’ve been in the industry for 20 years. I started with Turf and Lawn Care Victoria; they’re a contracting company for lawn bowls greens.

Favourite sport: I’d have to say cricket since I played it for 30 years.
Hobbies: Music. I’ve played guitar in bands and acoustic duos in the past. I’m mucking around starting a band with a couple of mates at the moment, we haven’t played together for a long time so it should be good.
Drinker / favourite drink: Beer.

Places travelled: England and Switzerland.
Favourite machine / equipment used in the workplace: Grooming reel.
What would make your job easier? No bowlers. People who don’t tell me how to do my job.
Your biggest mistake in the workplace: Not backing myself.
Personal work motto: My goal is to present my club to the best of my ability. Presentation is key.

Who has influenced you most professionally?: There’s a couple of Melbourne greenkeepers, definitely. Gary Furgood, and probably Brad Porter- he’s a South Australian greenkeeper, but they’re guys I ring for advice. Gary got me into green keeping, and Brad I met a few years back – he’s probably one of Australia’s best greenkeepers.

Who is your dream date? Jennifer Lawrence.
Describe your home garden: Pretty neat for a greenkeeper!
Funniest moment you have had in the workplace: Watching one of my offsiders chase a roller across a green. He was trying to kill a snake in the ditch, and the clutch jammed on and he turned around and the roller was taking off across the green so he had to chase it as it slammed into the ditch on the other side. I wish I’d filmed it!
Who would you turn gay for? Brad Pitt.

Who knew the Treasurer for the VGA was a cricket-playing rockstar? Thanks for participating Dyson!