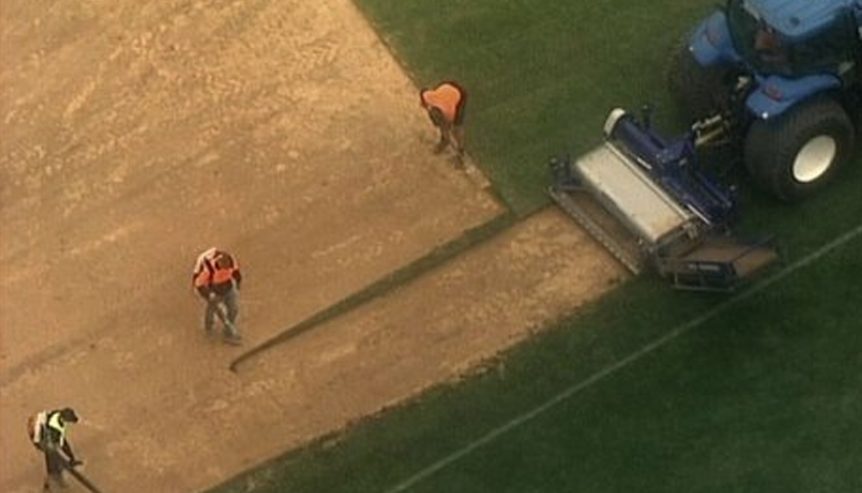 Players say they are not concerned by the Sydney Cricket Ground’s surface, as ground staff scramble to re-lay 3,000 square metres of turf ahead of Friday’s National Rugby League opening round match.

Officials were forced to enter the field of play with shovels and rakes during Saturday’s Super Rugby match to repair sections of the hallowed turf that were shredded under the weight of scrums.

Players from both sides of Friday’s upcoming clash between the Roosters and Rabbitohs have said they are unfazed by the damage.

“It’s an iconic ground and it’s our home for the next three years so I am not concerned at all,” he said.

“The groundsmen are pretty confident it will be in good shape and we’re just going to be concentrated on winning a game of football.

“I know there is a big issue with player welfare and everything like that, but at the same time they are professionals who look after the ground and we have our full faith and trust in them.”

“People are paid to do a job and I have faith in them,” he said.

“I don’t think rugby league has contested a scrum for over 25 years, so I don’t think there will be any issues.”

Ground staff have been working around the clock to resurface the SCG.

Rabbitohs hooker Damien Cook, who debuted at the SCG in 2013, said team managers had inspected the pitch this week and assured players the ground was safe.

“We saw a few photos of [the pitch] … staff checked it out and said there were no issues and that the field would be fine come Friday night,” he said.

“But you always take two different sets of boots to games and just see how it is.”

The SCG Trust has assured all three codes that the ground will be restored before this weekend’s games.