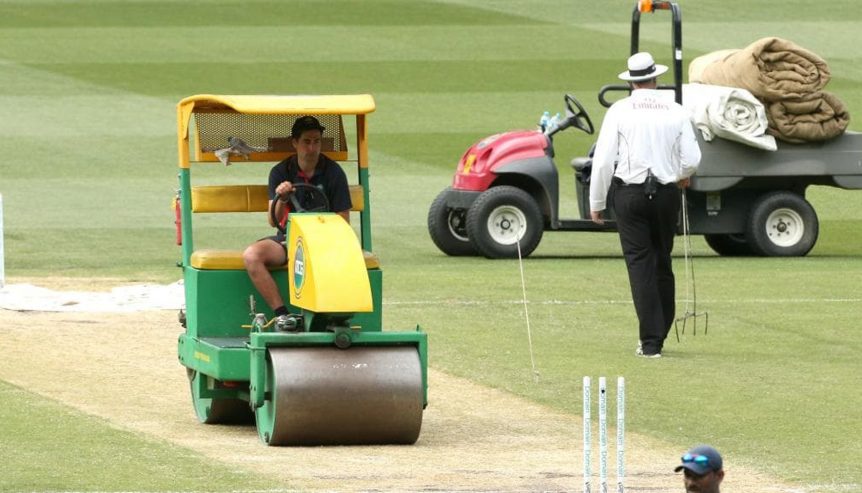 The MCG has warded off the threat of losing the Boxing Day Test after the ICC gave the maligned pitch a rating of “average” for its most recent outing.

The MCG wicket was graded as poor in 2017 and another poor rating by the International Cricket Council would have cost it three demerit points and put it in danger of losing the iconic event.

The most recent grading of average does not carry any demerit points.

The new Perth Stadium’s pitch for the second Test was also graded ‘average’ by the ICC.

The pitch for the Boxing Day Test had plenty talking. Pic: AAP

Despite the 2018 pitch being heavily criticised as flat and lifeless following day one of the Boxing Day Test, it improved throughout the match and India posted a 137-run victory on day five.

The MCG has launched a five-year rehabilitation plan for its centre wicket, with the first step to replace the concrete slab in the middle of the MCG with a concrete post and rail system, which it’s hoped will improve conditions for next season.

It’s also expected an unused pitch will be used for this year’s Boxing Day Test while at least four pitches with a new base formed with a higher percentage of clay, from the Grampians, will be rebuilt in the new year.

The four new pitches won’t be ready for use for at least three years.

“The Melbourne Cricket Club is pleased that this year’s MCG pitch rating for the Australia-India Test is an improvement on last year,” MCC chief executive Stuart Fox said.

“But, as we have said at the conclusion of the game, we know there is still more work that we can do to regenerate our wicket square and we are committed to our long-term plan for a significant upgrade and rejuvenation of our cricket pitches.”