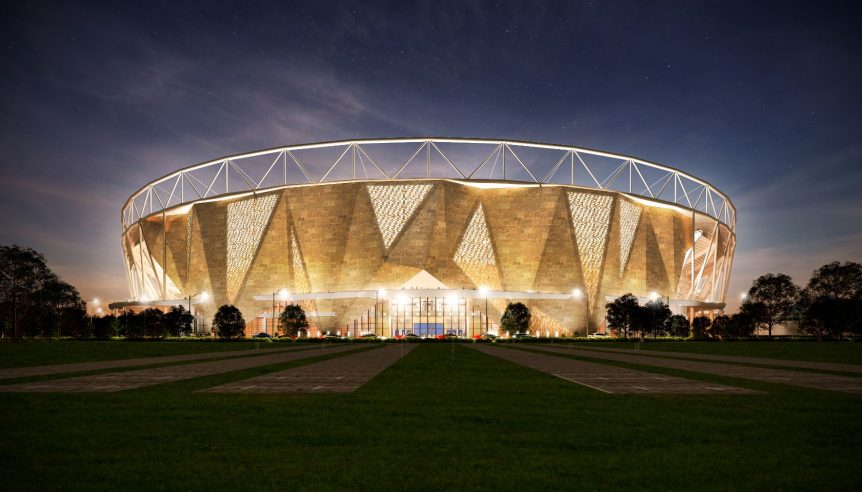 Motera Stadium surpasses the Melbourne Cricket Ground as the world’s largest cricket stadium, with a capacity of 110,000 seats.

It’s the next global achievement for the Asia-Pacific office of Populous, which was named Australian Exporter of the Year for 2019.

The Motera Stadium took three years to construct at a cost of USD $100 million and adds to the list of iconic sporting venues designed by Populous.

Populous Lead Architect and Senior Principal Andrew James said the scale of the project was impressive.

‘Cricket is the biggest sport in India and this stadium has been designed to bring together as many fans as possible, creating an incredible atmosphere for international cricket, regional and community games,’ Mr James said.

‘Every one of the 110,000 seats has uninterrupted sightlines of the field and pitch, and with a deliberate round, open stadium providing 360-degree views, you feel you’re a part of what’s happening.’

Populous has previously worked on other iconic venues, including Tottenham Hotspur Stadium in London and Yankee Stadium in New York.

‘They also provide opportunities to help enhance our international engagement.’

Populous won the Professional Services category at the Premier of Queensland’s Export Awards last year and went on to be named 2019 national champion at the Australian Export Awards.

Mr Henry said it was an honour to win both awards and to continue contributing to the Queensland economy through global projects.

‘Winning these awards shows that Queensland design talent is equal to the best in the world and this provides significant export opportunities for Queensland,’ he said.

‘Being based in Queensland helps us when we’re working on projects in Asia, because the time zones are similar and it’s easy to fly to projects in the region.’