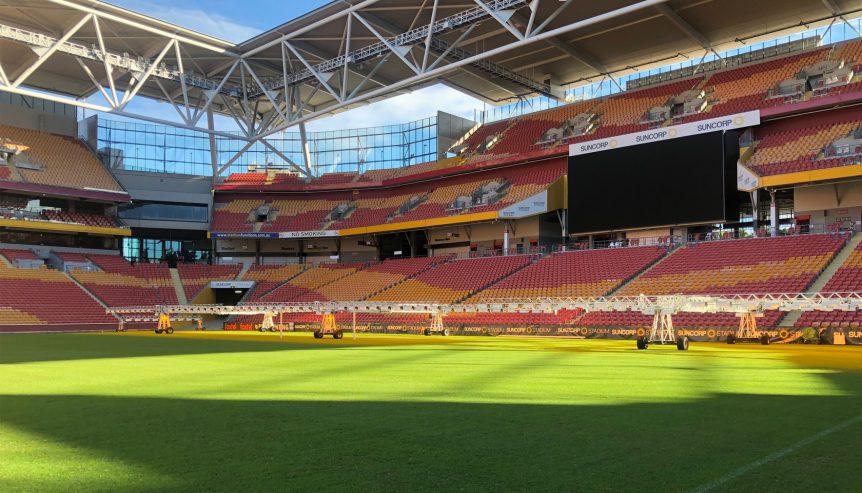 Mal Caddies is a stalwart of the turf industry, beginning his career on a golf course and now heading up Brisbane’s Suncorp Stadium.

Beginning his apprenticeship in 1985 at Frankston Private Golf Club in Victoria, upon completion he headed up to Brisbane where he worked at numerous golf courses before a three-year stint at Norfolk Island. From here, he returned to Brisbane to coincide with the birth of his first child in 1997 and spent the next eight years in golf before moving to Suncorp Stadium in 2003.

The team at Suncorp is made up of three full time staff: Mal is the Ground Manager, Robert Saxby is Assistant Ground Manager and Alex Jensen is the Groundsman. Then, generally they have two casual staff on for a soccer game day and seven in total for other events like a rugby league or union match. The casuals are mainly employed to deal with divots at half time and full time also to wash out lines or change goal posts if required at full time.

Mal explains how a weekend can look at Suncorp.

“For example, this weekend we have the Roar on Saturday evening and then a concert soon after. Concert preparation involves some spray applications leading up to the weekend – a primo and fungicide application and then after the Roar game, we need everything to do with football gone by 11.30pm.

“Then, at midnight, the flooring company will come in and put the flooring down for the stage and the roadways for forklifts and cranes have to be in by 5am Sunday morning, so that the stage can start being built.”

Mal says that they’re getting better and better at the concert preparation and recovery as they gain more experience over the years.

“We have to replace any turf where a roadway has been down after a concert because the amount of traffic kills the turf, but the rest of the field where the patrons are is generally pretty good, because we keep the flooring down for as short a time as possible.

“Once a stage is removed, we run a magnet over the field to pick up any magnetics like screws or steel that could be damaging to a footballer. After that we generally verti-drain it straight away to relieve any compaction and then we start any turf replacement, the amount of which varies case-by-case. After U2 last September it was 3200sq metres and after the upcoming Queen concert it may be as low as 800sq metres,” explains Mal.

Outside of concerts, the normal football preparation for Suncorp involves the usual suspects: line marking, installation of goal posts and mowing (which Mal says at the moment is at about 16mm). 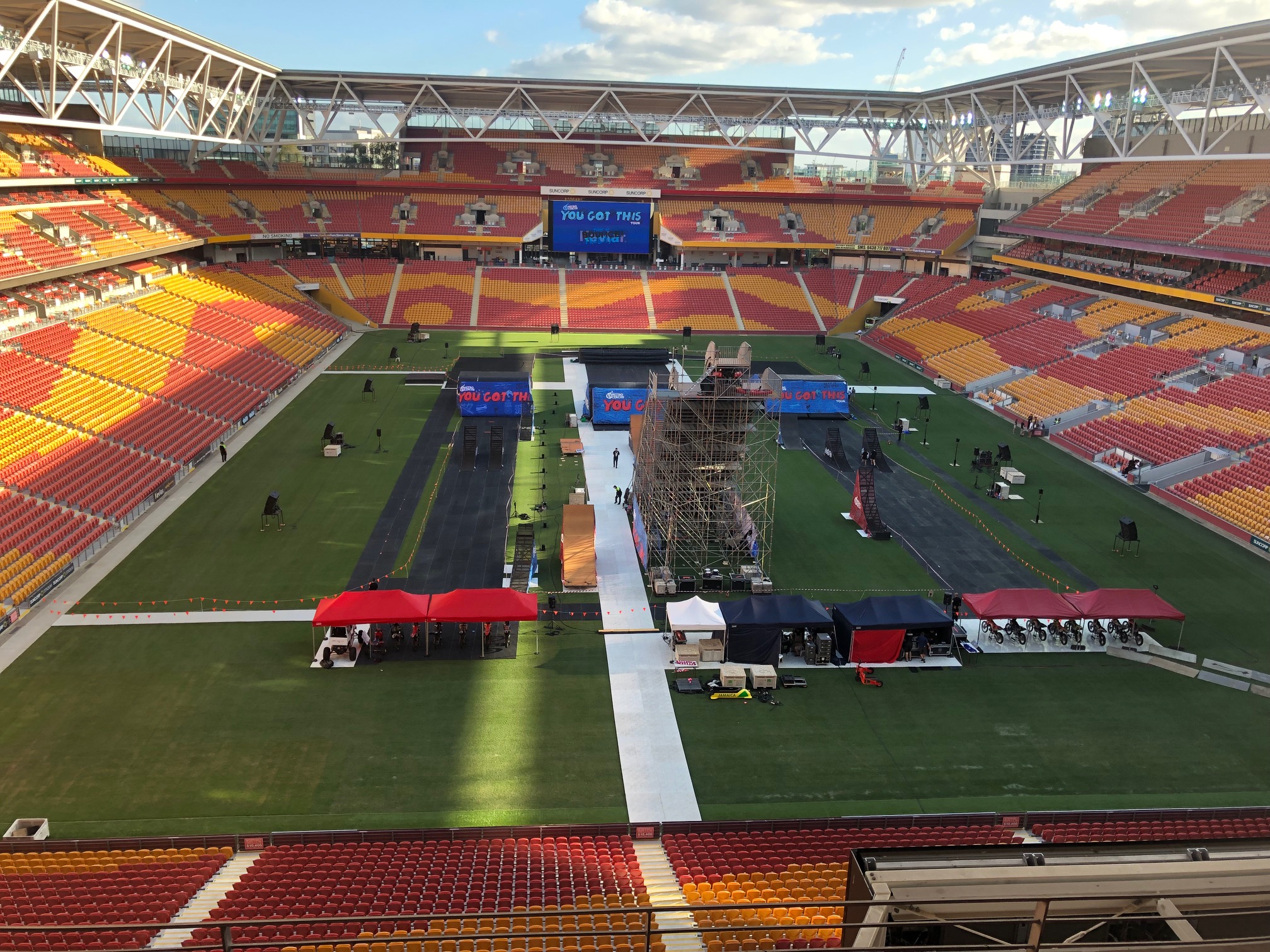 Because of Brisbane’s climate, Suncorp can’t run as a Legend Couch surface all year round, so the team oversows the ground in winter with ryegrass. This has its challenges for the team, as they have to transition to ryegrass in in early winter when sport is in full swing, with no breaks and heavy traffic. Mal’s solution to this is to use a lot of ryegrass early in the season trying to get it up and going.

Then, the other extreme is the summer period when they’re transitioning back from ryegrass to couch grass. Normally the team doesn’t have a chance for a transition period then either because of football.

“Last year was a bit of a unique situation with us,” says Mal.

“The Broncos didn’t make finals and the Roar started their season late as well, so we actually had a window to spray out the ryegrass, which we haven’t done for years. Normally we just have to replace the ryegrass field with a couch field, but we managed to do a full transition last year.”

At Suncorp, they use light rigs on their northern end from April to August when there is lack of natural light, and they started using turf fans last year. Mal says that the fans in conjunction with the lights has made a big difference in keeping the surface dry, which has shown less wear and divoting, leading to a stronger surface.

“What used to traditionally be our worst end of the ground in winter has now become arguably our best end, since using the lights and improving our knowledge of them every year,” says Mal.

Mal and his team are passionate about sustainable waste management. They put all their mowing clippings in to green waste, which is sent to a mulching place and they catch all our water off the roof for irrigation purposes.

In 2020, there are a couple of extremely significant periods throughout the year. There’s Magic Round the first weekend in May when all the NRL games are played at Suncorp Stadium.

“We’re aiming for Magic Round to be as successful again this year as it was last. Even now, our turf maintenance regime is centered around what will happen in May, so we are trying to get our couch grass as tough as possible starting now.

“We’ll also host the third State of Origin game, which is played on a Wednesday night and before that we have a rugby union test match on the Saturday – so that’s a another very big week for us with a lot of pressure!” says Mal.