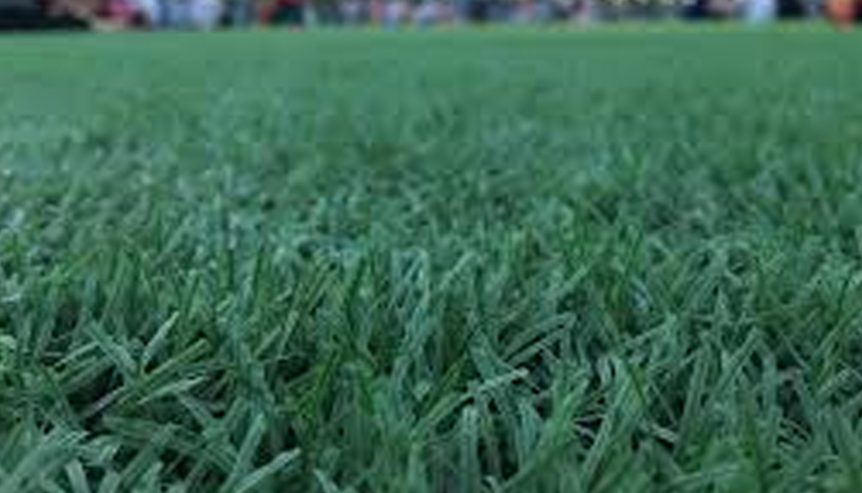 Volunteering to look after his club’s cricket pitch led to Mark Shaw venturing onto runways at some of the world’s busiest airports. Chris Barclay discovers the turf expert certainly doesn’t have a job that is like watching grass grow.

You’re the Turf Business manager of PGG Wrightson Turf. How did you get involved with this growth industry?
My father and four of his brothers worked at Pyne Gould Guinness in the seeds business. I came straight from school and worked there for two years before I went to Australia for 18 months and cleaned windows on high-rises. I came back for a job at Mt Hutt, my goal was to travel around the world skiing but I fell off my skateboard on the Port Hills, cut my hand, missed the (ski) season and went back to PGG and now I work for PGG Wrightson Seeds. I’ve never left. I head up the turf business for Oceania. That’s golf courses, sports fields, councils’ amenity spaces. In a nutshell, anywhere they mow grass.

How did you end up focusing on the turf aspect of the business?
Sport. I didn’t really have an affiliation with farming. I was looking after a cricket wicket for the Addington Cricket Club. We moved into the senior A comp and we basically had to rebuild our pitch. Someone had to look after the wicket and the practice pitch. The previous turf manager (at PGW Seeds) was actually the head groundsman at (Hamilton’s) Seddon Park, Ian McKendry. He helped me out. Macca cut his teeth at Lancaster Park under Russell Wyllie back in the day. When Ian came into the business as a turf agronomist and started the evaluation process you can see out here now … that’s what sparked my interest.

How do you become an authority on turf?
It’s an apprenticeship scheme, similar to any trade. Three-years on the job with a number of block courses you go through, as a builder would do. I completed my level 3 qualification while I was working at Barrington Park. 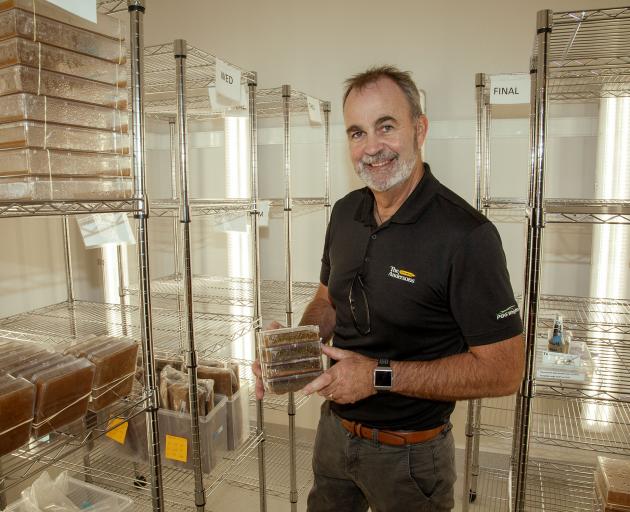 Mark Shaw in the seedling growth room, part of a process that can take a decade before a sample is marketed. Photo: Geoff Sloan

At first glance this looks like a pretty laid back place to work. There’s a mini rugby field with posts and bucket seats from Lancaster Park, a putting green with a bunker full of golf balls.
They’re there for demonstration purposes. This is the plant breeding and research centre. It covers grain, through to forage, through to brassicas, through to turf. It takes up to 10 years and about a million dollars to bring a cultivar to market. In any one year we’ll probably throw out a thousand potential cultivars.

No disrespect to leafy Barrington Park and its playground, but you get to go to a higher class of sporting venue these days don’t you?
We’re very lucky that we get to visit some pretty amazing places on a daily basis. Eden Park to Kauri Cliffs to Forsyth Barr Stadium to Jack’s Point Golf club. You kind of take it for granted.

This sounds ridiculous, but explain the distinction between the 18th green at Royal Troon and a rugby field?
There’s different growth habits. Forsyth Barr (in Dunedin) is a ryegrass, a bunch type plant that grows very actively in cooler conditions. As a species it requires high levels of nitrogen to keep the plant stimulated and growing actively. Browntop is a low nutrient requirement plant, it doesn’t require a lot of nitrogen to keep it healthy. Browntops can tolerate mowing heights down to 2-½ to 3mm. If you mow a ryegrass down to 2-½ to 3mm you will lose ground cover pretty quickly. Your stadium turf … that’s predominately a turf-type perennial that’s tighter and finer in the leaf than a forage type that’s grazed by cows.

Heading back abroad, the company established a foothold in Uruguay about 15 years ago and it’s not all about grass is it?
When I first went over there they were marking soccer fields with a paint roller and 20 litre buckets of house paint. It was taking them three hours and you could imagine the quality of it. There were drips of paint all over the ground, footprints going through it. We took a battery powered machine over there and showed them how to mark a field in 20 minutes with a paint that’s safe for use on turf.

Back to rugby. Loathe as we are to give Dunedin any credit, Forsyth Barr Stadium looks an absolute picture doesn’t it?
It’s the first permanent roofed stadium with a living turf surface in the world, and it’s a success story. The scrums are stable, you’ll never see a divot on that ground. They plant the real grass in a sand profile and then stitch artificial fibres into that to give stability. The roots of the ryegrass lock around the fibres creating a very stable surface. 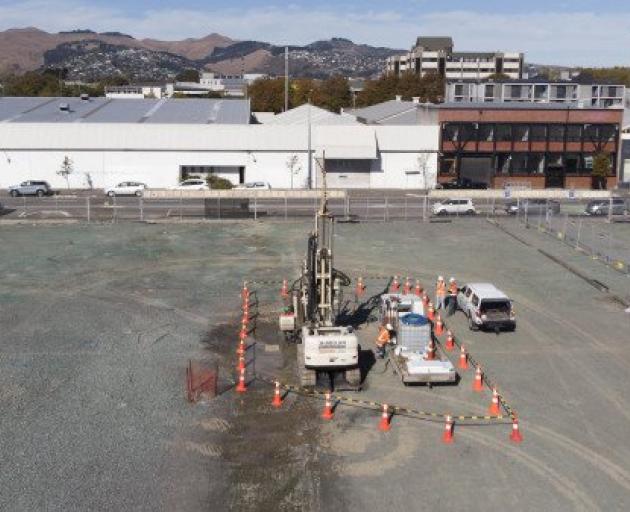 Large drilling rigs at the site on which the Canterbury Multi-Use Arena will be built. Photo: Newsline / CCC

The Christchurch Multi-Use Arena is on the drawing board, how should the turf be incorporated to that enclosed venue?
A number of companies have looked at robotic removable turf systems, similar to what’s used at (English football club) Tottenham Hotspur. You can push a button there and within six hours that turf goes into a racking system like a vertical car park. Then you have a grey floor you could put an ice skating rink on.

This sounds pricey and unrealistic for a 30,000-capacity (max) stadium?
There would be a massive cost with a robotic turf system, and the turf is always the last thing they’ll think about. If it was me you’d build your stadium so the turf system could be pushed out into the car park and rotated to follow the apex of the sun. That way every bit of the ground gets the same amount of sunlight on it throughout the day. I don’t believe we have got enough land on the site for that.

You’re a one-eyed Cantabrian but is the grass really greener outside the four avenues or New Zealand as a whole?
I might be a bit biased but I believe our stadium managers do a better job than anywhere in the world. I challenge anybody to find a better looking ground than Eden Park or FMG Stadium (Hamilton), that’s just an immaculate ground. You go to Forsyth Barr and you look at the turf quality any day of the week, it looks amazing. I know they may have more matches on grounds in Australia but the turf just doesn’t have that same x-factor. Marvel in Melbourne (the retractable roof stadium in Docklands) is probably one of the worst grounds in the world for getting actual sunlight onto the ground. I believe they have the most grow lights of any stadium in the world. They joke when they turn them on Melbourne’s CBD does a bit of a flicker because of the draw on the power.

Winter is coming. You’re not a fan of artificial grass in the backyard but is there a place for it on Canterbury’s frost-bitten sporting landscape?
I believe every school in New Zealand should have an artificial field that is World Rugby and FIFA approved. They could then lease that ground at night to local clubs for training and then both the club and school main fields are in much better condition for the players on a Saturday.

Condition-wise, how does your lawn rate? Surely it resembles a carpet?
We have a bit of a competition across the New Zealand (PGW Turf) team. I present the award so I’m not allowed to give it to myself. I’m actually doing a bit of work on my lawn at the moment. Mine is pure fine-fescue, it’ll be the same as the grass that you’ll see at (Queenstown’s) Jack’s Point Golf Course on their fairways. Pure fine-fescue is the finest leafed grass you can get. It is the lowest nutrient requirement grass and probably the slowest growing out of all the lawn options you have. The beauty of it is you can spray one chemical over it and selectively removes any other species of grass. It’s very easy to keep it pure but if you’ve got kids and dogs, you’ll probably want a perennial ryegrass that can handle the wear.

When you’re at a mate’s place for a barbecue, do you automatically judge the lawn ahead of the chops?
I do, and I can guarantee in the spring or the autumn a mate, or a mate of a mate, or someone at work, will say: ‘I’ve got a problem with the lawn, what do I do about this? And then you end up getting dragged into a whole lawn renovation and you’re round there with a rake in your hand.