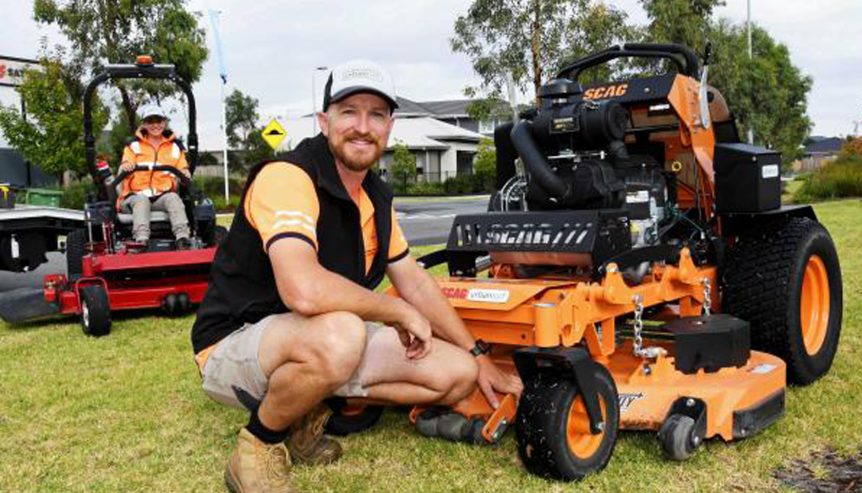 There’s no ‘sitting down on the job’ anymore for the Urban Turf grounds maintenance team, as they welcome the addition of one of only three new state-of-the-art, stand on, ergonomic lawn mowers in Australia – and it’s certainly turning heads in the local community.

Dale Pakenham has owned and operated his business, Urban Turf, for almost 15 years now and as someone who is “passionate about cutting grass”, he said that it was exciting to see the benefits this new lawn mower brought to the table for both his staff and the business.

“This stand on mower is great, it has so many benefits,” Mr Pakenham said.

“A major benefit the machine offers is great operator visibility as we work the machine in and around trees and obstacles.”

It’s not only “nimble” and “easy to operate” according to Mr Pakenham, but the new machine also provides staff with added health benefits.

“Simply put, standing mowers are better for your back,” he said.

“As you mow, your feet and legs receive the shock absorption instead of your lower back.

It might seem strange, but it takes a toll on your body if you are using a sitting mower.” 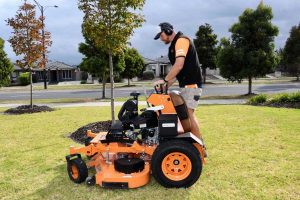 Mr Pakenham said that since adding the stand on mower to his grounds maintenance fleet in mid February, many people had stopped in the street to marvel at the machine.

“A lot of people have been stopping and looking, and tradies saying ‘what the hell is that?’ because it’s such a strange concept,” Mr Pakenham said.

“Everyone sees these [referring to a sit down mower] and you don’t look twice.

It’s also got a lot of flashing lights on it, so when people see it, they just don’t know what it is.

It doesn’t really look like a mower. It looks like some kind of remote controlled robot with eyes,” he said. 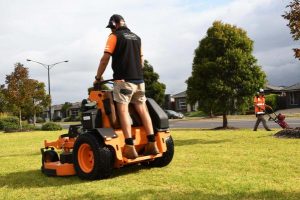 With it’s futuristic looks and petrol injected engine, it’s no wonder that this ergonomic mower is state-of-the-art and one of the best that money can buy.

“This is really new technology and that’s why there were only three of these that came into the country.

It’s got the biggest engine on a stand on mower ever made,” Mr Pakenham said.