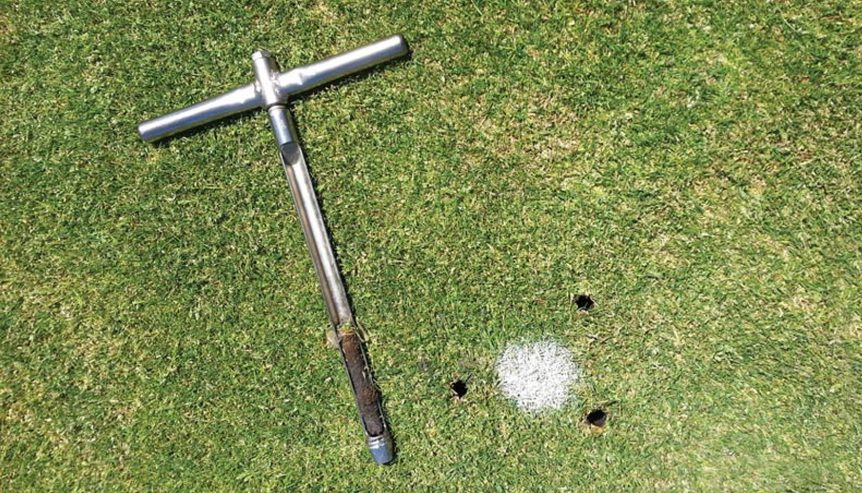 Editor’s note: This research was funded in part by the United States Golf Association.

Microbes, specifically bacteria and fungi, are present in all ecosystems, including the thatch and soil beneath golf courses. These microbial communities provide benefits to the turfgrass, such as biocontrol, promoting plant growth, degrading the thatch layer, detoxifying chemicals like fungicides, and increasing plant tolerance to stresses, diseases and pests.

There is interest in using biological products that incorporate some of these microbes to mitigate or replace the need for chemical inputs, but these formulations often have inconsistent results (10). An alternative is to use practices that encourage beneficial microbes or increase the diversity of organisms to create a community that can better withstand stress from the environment (heat, drought, cold), pests or diseases. Organic and low-input practices are believed to benefit the microbial community by increasing the biodiversity of microorganisms and the number of microbes involved in biocontrol and plant growth promotion. However, little is known about how management affects microbes on golf courses.

The aim of this study was to better understand the bacterial and fungal composition of the turfgrass soil community under different management intensities, represented by roughs (least intensely managed), fairways and putting greens (most intensely managed). We included an organic course and a low-input (referred to as a “hybrid”) course to compare with a conventional course to look at the effects of management type. Because there is only one truly organic course in North America, we were not able to replicate all three management types for comparisons. We used established golf courses instead of research plots because we wanted to look at the cumulative effects of management inputs long term (specifically, after at least 10 years of management).

This is the first study to use metagenomic sequencing to characterize both bacteria and fungi from turfgrass soil in different management areas. This technology determines DNA sequences of individual organisms in an environmental sample, which are then compared with databases of DNA sequences from identified organisms in order to reveal the identity of the individuals in the environmental sample. Compared with previously used techniques, this method can provide a more detailed characterization of the bacteria and fungi on golf courses.

We sampled soil from roughs, fairways and putting greens of three holes per golf course in May of 2013 and 2014 (Figure 1). All three golf courses were located within 6 miles (10 kilometers) of one another in Massachusetts. The courses had similar grass species and management practices, with the exception of rolling and only organic products being used on the organic course, and reduced synthetic pesticide applications and the addition of a biocontrol bacteria in the irrigation lines of the fairways on the hybrid course. Another important difference was that the organic course had USGA sand-based putting greens, whereas the other two courses had push-up greens.

Soil samples were brought back to the laboratory for DNA extraction and soil analyses (pH, phosphorous, potassium, percent organic matter and soil texture). The extracted DNA was used for quantitative PCR (qPCR) and metagenomic sequencing to determine the bacterial and fungal compositions. Abundances of bacterial and fungal pathogens and microbes involved in plant growth promotion and biocontrol were calculated. Because bacterial and fungal species assignments are based on DNA sequence similarity, we reported on the genus of each organism instead of the species in order to be conservative in our estimates of diversity. The computer program PICRUSt (Phylogenetic Investigation of Communities by Reconstruction of Unobserved States) (4) was used to predict ecosystem functions — such as nitrogen fixation and chemical degradation — of the different bacterial species.

Abundance and diversity with soil characteristics
Past research has shown pH, soil texture and nitrogen strongly drive bacterial and fungal communities. We wanted to test whether soil texture and nutrients were influencing differences in microbial communities on the golf course, regardless of different chemical inputs and intensities. However, we did not see any strong correlations with soil type and nutrients and bacterial or fungal abundance or species. We may not have measured an important environmental or soil property that was influencing the microbial populations, or the effect of management inputs may have been greater than the effect of soil type or nutrient. 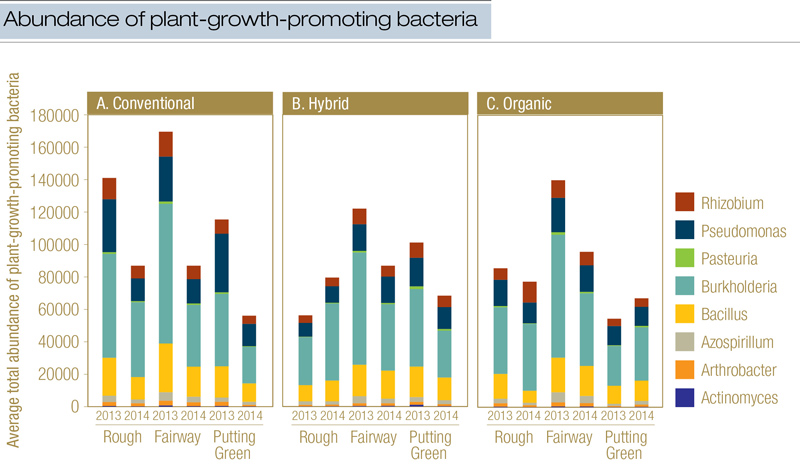 Figure 2. Average relative abundance of plant-growth-promoting bacteria among the three management areas (rough, fairway and putting green) on (A) conventional, (B) hybrid and (C) organic courses.

Understanding turf soil microbes may allow turf managers to optimize fertilization based on the bacteria involved in the nitrogen cycle. Although we saw differences in the bacteria on the three golf courses and management areas, we did not see any trends that would suggest management areas or inputs affect nitrogen-cycling bacteria. Increasing populations of bacteria and fungi that promote plant growth may also help reduce fertility inputs, suppress weeds and potentially reduce disease. The abundance of bacteria with putative plant-growth-promotion activity varied among management areas on all three courses, but there was no trend suggesting management intensity was affecting overall populations (Figure 2). Turfgrass bacteria have been shown to detoxify xenobiotic chemicals, such as pesticides (6, 7). We expected to find higher numbers of bacteria that could metabolize these compounds on the putting greens, as they receive more chemical inputs, but we found no significant differences among xenobiotic detoxifiers on the three courses.

Fungi
We found greater abundances of mycorrhizal fungi — which increase growth in many perennial turf species (2) — on the putting greens of the organic and conventional courses. In contrast with earlier studies, work published in 2005 found higher numbers of these organisms on putting greens (2), and the researchers speculated that the mycorrhizal fungi had developed resistance to fungicides or that fungicides had never reached them in the soil. This could be true for our study, where the additional fungicides did not affect the mycorrhizae. Alternatively, the increased nitrogen applications on the putting greens could have led to greater populations of mycorrhizal fungi on the greens than on the fairways and roughs (3).