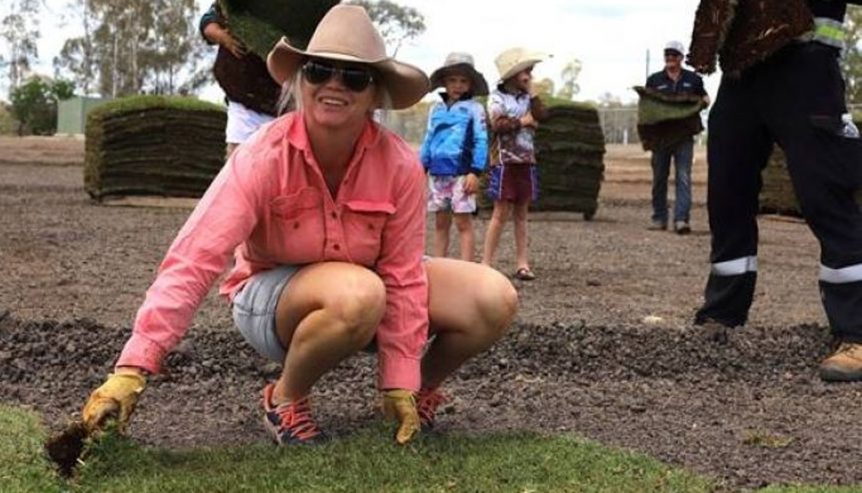 A parched school oval on Queensland’s Western Downs has been transformed from a dust bowl to a lush play space for students.

Over four weekends, a team of 150 volunteers laid 150 pallets of turf at Wandoan State School after realising children did not want to play on it because it was so dry.

“The fields were a drought-stricken paddock that our school kids could hardly play on,” P and C committee president Greg Zillman said.

“It’s important for them, the kids, to go out and run around so that they can focus in the classroom.”

Fourteen-year-old Cooper Nunn said students had been grazing their knees and elbows when they tried to play on the oval.

“[It was] really bad; there were holes everywhere, and the bindies and the prickles were not very good,” he said.

“The kids are so excited about [the new turf], especially to play footy because footy is really big around here.”

Mr Zillman said the improvements were well-received by students, some of whom who had not seen green grass for 10 years.

Photo: It was a relief for turf-layers to see the children rolling around and playing on the grass. (Supplied: Wandoan P and C)

“It was really a relief to see them tackling each other and rolling around in the grass,” he said.

“That’s something that they’ve never been able to do on the school ground.

“I think their smiles tell the story. I’m sore [from laying turf] and relieved.”

Cooper said the town has been in drought “for a few years now” and many of his fellow students were feeling the effects.

Photo: The P and C committee decided to break up the job and lay the new turf across four weekends. (Supplied: Wandoan P and C)

“Some students have not seen green grass, especially the younger students who have always known that Wandoan has brown grass,” he said.

“It really brings down our morale [and] kids are really unhappy to see their parents stressed and not being able to pay their bills.

“I’d like to say a huge thank you to all the volunteers. It really, really makes us really happy.”

The $160,000 project includes a new irrigation system which pumps treated water from council bores to keep the turf green.

“We’re currently getting water free of charge from the Western Downs Regional Council to the school grounds,” Mr Zillman said.

Photo: The new turf will be kept green by pumping treated water from council bores. (Supplied: Wandoan P and C)

He said the project had been a mammoth effort — from fundraising to organising logistics — over three years.

In addition the P and C committee received a number of grants from mining companies in the area.