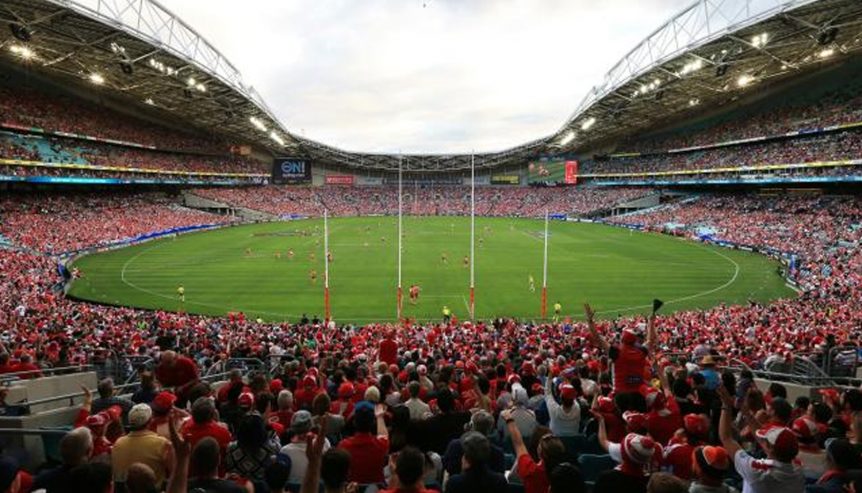 Sydney risks losing the NRL grand final if the State Government bows to a stunning move from the AFL to hijack plans for transforming ANZ Stadium.

The Daily Telegraph has exclusively obtained a letter from Victorian-based AFL supremo Gillon McLachlan to NSW Premier Gladys Berejiklian, where he pushes a claim for ANZ to be maintained as an oval-shaped venue in the looming $1.6 billion stadiums allocation.

The brazen bid comes despite the AFL and the Sydney Swans virtually abandoning the Olympic Stadium over the past 12 months as the game struggles to fill neighbouring Spotless Stadium, even for elimination finals matches.

The NRL has responded by warning the city could lose a 20-year guarantee to host the grand final, as well as State of Origin matches, if a Memorandum of Understanding they have with the NSW Government to make the transformation of ANZ Stadium into a world-class rectangular venue the No. 1 priority is broken.

“We would expect the terms of that MOU to be delivered so we can guarantee our biggest rugby league matches will remain in Sydney for the next two decades — something which will provide hundreds of millions of tourism dollars to the state’s economy,” said an NRL spokesman.

The MOU the NRL has with the State Government includes the rebuild of Parramatta Stadium and an upgrade of Allianz Stadium, and in return the pledge is to keep league blockbusters in Sydney.

As well as vying to railroad the hopes of rugby league and soccer with ANZ Stadium, the AFL’s list of requests include a specific emphasis on the redevelopment of the Brewongle-Churchill and O’Reilly Stands at the SCG being an urgent priority as well as pitching up for Spotless Stadium to have its capacity increased to up to 35,000.

“We believe the opportunity cost of prioritising such redevelopments (of ANZ and Allianz Stadium) at the expense of oval venues and fans of oval-based sports should be contemplated in any business case that determines the Government’s priorities with respect to stadium investment,” said McLachlan of his specific request for maintaining the “ability for ANZ Stadium to host oval sports where large crowds are expected”.

Football Federation Australia has also hit back at the AFL’s Johnny-come-lately approach, reiterating that a state-of-the-art rectangular ANZ Stadium was the clear priority for the city.

“You can’t blame them for trying though they’ve come to the party a bit late,” said FFA chief executive David Gallop.

“The priority should be the development of world-class rectangular stadiums. Football has led the way with the demand for a high quality stadium at Parramatta.

“We have already had 50,000 plus crowds five times this year at ANZ and Honduras is still to come. Those fans deserve a better facility and this city needs to compete against Melbourne, Perth, Adelaide and Brisbane.”