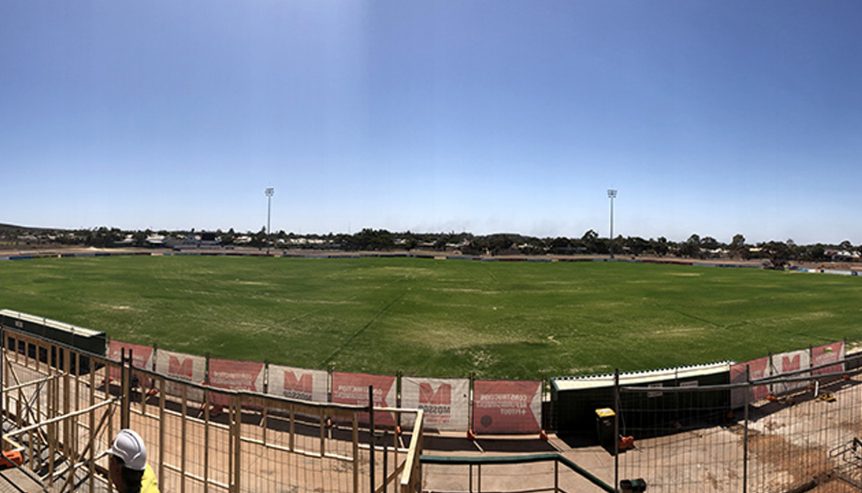 It was a thumb-ups on the progress as the visiting officials met with Council staff for a walk-around on the oval to inspect the work being done on the surface and a tour of the construction site to see the progress of grandstand area redevelopment.

Council has initiated a $2.8m Stage 1 redevelopment project at Bennett Oval that will see facilities upgraded and the oval surface renovated in preparation for the Marsh Cup Community Series AFL match on March 7 next year.

Ben Lowe, of the AFL Marsh Community Series Operations team, provided Council with some valuable tips and outlined the AFL requirements for next year’s big match.

“Council has been working in conjunction with the Port Adelaide Football Club and GFG Alliance after our visit in late 2018,” Ben said.

“The venue is well on track with our suggested upgrades required to host an AFL game.

City of Whyalla CEO Chris Cowley said he was particularly impressed with the surface of Bennett Oval after just a few weeks using the new sprinkler system with fertilising and coring also starting.

“You can see the difference in the grass and surface in the short time these sprinklers have been operating,” Chris said.

“Council’s ‘ovals crew’ have done an amazing job and we are well on track to presenting a fantastic surface for next year’s AFL game.”

The surface work is one part of the Bennett Oval redevelopment that also includes the renovation of the grandstand changeroom facilities, new shower and toilet facilities, brand new bar and canteen facilities, lighting and general upgrade of the surrounds.

Stage One of the Bennett Oval redevelopment has been assisted by a $890,850 State Government grant from the Grassroots Football, Cricket and Netball Facility Program (The Grassroots Program), administered through the Office of Recreation, Sport and Racing. Half of this money will go towards improvements at Memorial Oval.

Subsequent stages of the Bennett Oval redevelopment would involve the integration of other sports and associated facilities into the area to create a greater sporting precinct.

Any enquiries on this project, or others, can be made by calling Council on 8640 3444 during office hours, by submitting a customer enquiry on our website http://www.whyalla.sa.gov.au/page.aspx or via the free My Local Services app which can be downloaded at https://www.lga.sa.gov.au/mylocalservices