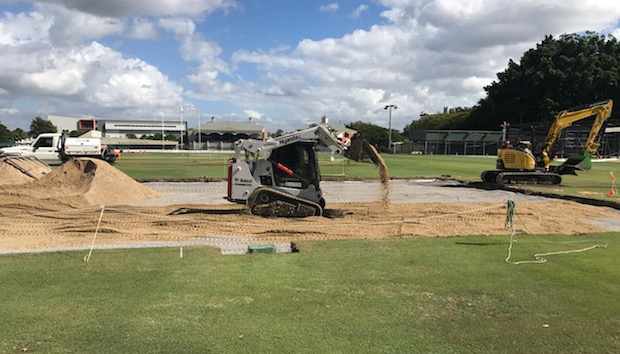 Premier Greenkeeping, in conjunction with Queensland cricket, are undertaking a groundbreaking project to determine which species of couch is best suited to a cricket wicket in Queensland’s warm climate.

Five wickets have been constructed on Ray Lindwall Oval at Allan Border Field over the past month, each featuring a different type of couch grass.

Over the next two years, the wickets will be monitored to determine which couch variety stands up to Queensland’s warm conditions by assessing performance and recovery.

Owner of Premier Greenkeeping, Rick Shenton, is overseeing the project and walked turfmate through the construction process and what it will achieve.

“So there are five significantly different couches on that wicket block.”

“We are still only in the establishment stages, but over the next year to eighteen months – when they get played on in the same climatic conditions – that’s when we’ll see how they perform and how they recover.”

“We want to see how the pitch performs; the bounce, the trueness, the movement off the seam.”

Shenton said the thickness of the leaf determines the characteristics of the wicket and how the ball is likely to behave.

Coarse grasses such as the Legend species will contribute to significant bounce and seam movement, while on couch species with a finer leaf, any movement is far more subtle.

“The leaf on some of them is finer than others, so there might be less movement of the ball off the seam,” Shenton said.

Shenton said the resilience of the individual couch species is also important to monitor.

“With a cricket pitch, we’re shaving it on 3 to 4mm, we’re putting a two tonne roller on it, and we’re drying it out,” he said.

“The tougher the couch, the better it will come back.”

Head curator at Allan Border Field, Jarrod Bird, will be keeping a watchful eye on the wickets throughout the upcoming summer.

His findings will reveal which couch type is ideal for cricket wickets in Queensland, and other locations with warmer climates, based on a criteria of recovery and performance.

“[Jarrod will] be working on the pitches; preparing them, monitoring them, and then helping with recovery to bring them out of play so they recover properly,” Shenton said.

“He’ll be able to give his professional opinion on how each [couch species] performs.”

“They [the wickets] will get used two or three times each throughout the summer, so by April they’ll have an understanding of the characteristics of it through summer.”

“Then next winter he [Jarrod] will still be using them because the ground is used 12 months a year.”

Since the completion of wicket construction two weeks ago, preparation for use has begun.

Shenton said this process includes watering the wickets, using a light roller to keep the roots in contact with the soil, and mowing it on a regular basis.

“They’re rolling it lightly with a walk-behind mower to squash the turf into the soil” he said.

“It gets watered everyday and it’s getting its first mow now.”

“They’re even using growth sheets during winter to keep the heat in.”

The project is blazing a trail for further research in this field, and will have many other regions around Australia looking on with interest.

“If someone from Victoria is seeing this, they’ll probably say, ‘well we don’t get 30 degree heat for six months of the year, we’re minus two in winter’.”

“The cooler climates, mainly in winter, is where they’ll have to be subjective with their own observations because it’s a lot cooler climate than where this experiment is taking place.”

Shenton said the results obtained through monitoring the performance of the AgriDark species will be of interest to those tending wickets’ in vastly different conditions to Queensland.

“There is one couch variety, the AgriDark, which actually comes from New Zealand,” he said.

“So that could be of interest to the southern states – Melbourne and southern NSW – to see how it holds up. Even Tasmania might be interested in the AgriDark.”

“This [project] will be beneficial for the whole of Australia. It is going to be used as a guideline to suggest that a particular couch could be used depending on everybody’s individual situations.”

That the project is taking place at a major venue excites Shenton, as it produces superior results to experiments conducted behind closed doors in a controlled environment.

“It’s not a block in a science museum, this is actually at the coal face and it’s going to be played on by First-Class cricketers,” he said.

“If Australia have a camp [at Allan Border Field], they may have a center wicket on them.”

“They’re going to be used in proper situations.”

When asked about how Queensland’s unpredictable weather may influence the results of the experiment by impeding the progress of turf growth, Shenton said it is more of a help than a hindrance.

“It loves it. A lot of the nitrogen in the storms, the water, the heat and the humidity, make the couch go berserk,” Shenton said.

Wintergreen couch, one of Australia’s most popular turf options, is currently used on the main wickets at Allan Border Field.

If the results of this experiment suggest there is a better alternative, the venue’s net facilities and wickets could be in for an overhaul.