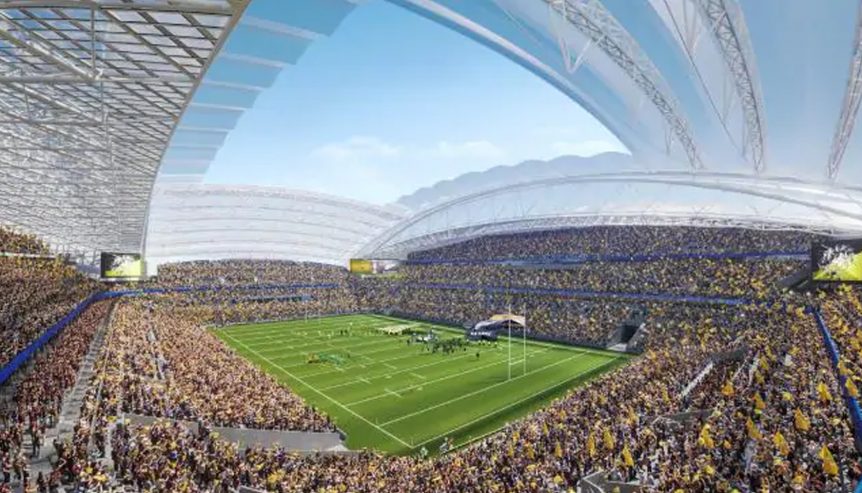 The new plans for the $810 million redevelopment of the ANZ Stadium in Sydney Olympic Park have revealed.

The NSW Government today released the plans, which include reducing the stadium’s capacity from 85,500 to 70,000, for public comment.

There will be capacity for a further 20,000 people on the field for concerts.

The plans include changing the playing field from an oval to a rectangular shape.

Seating in the lower and middle sections would be redeveloped so the seating bowl is steeper and gives people a better view of the field, while bringing them closer to the action.

Parts of the northern and southern sections of the roof would be replaced to ensure all seats will be covered and protected from rain, while the eastern and western sections would be extended.

New entrances would be build at the northern and southern facades and new advertising signs provided at both entrances. High-definition video replay screens, LED lighting and other improvements will be included.

Amenities would be upgraded including an expansion of the food and beverage concessions, upgrades to the bathrooms including more female facilities, moving corporate suites from level 3 to level 2, upgrading change rooms to become unisex and a refresh of the member and corporate facilities.

To facilitate the redevelopment, four trees will be removed to establish a temporary construction compound.

“Community consultation is an integral part of the planning process and the applicant will have to respond to the feedback we receive,” Ms Sargeant said.

The public will have until Wednesday, October 23 to comment on the plans.

To view the plans and to make a submission, click here.