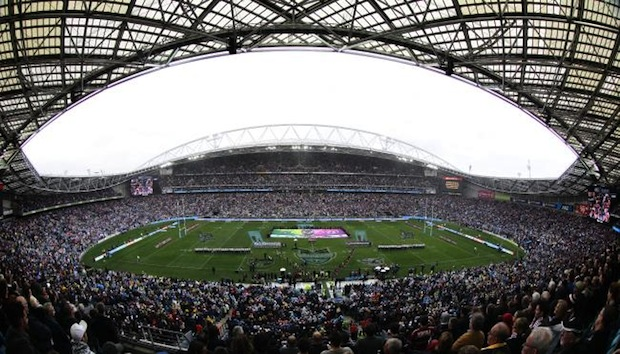 ANZ Stadium is set to sponsor the NRMA Kennedy Awards for Excellence in Journalism’s award for Outstanding Sport Reporting.

The NRMA Kennedy Awards for Excellence in Journalism today welcomed ANZ Stadium’s ongoing commitment to the awards with its generous sponsorship of the prestigious Peter Frilingos Award for Outstanding Sport Reporting for the fourth consecutive year.

The winner of the major NSW sports media award will be announced at the glittering 6th Kennedy Awards on August 11 at the Australian Turf Club’s Royal Randwick Ballroom, Royal Randwick.

Mr Simon Dulhunty, the chairman of the Kennedy Foundation which stages the annual awards, thanked ANZ Stadium for its commitment to the Kennedy Awards and to quality sports journalism in Australia.

“Sport, with all its fierce intensity, passion, exceptional skill and sacrifice – not to mention the agonising lows that come with defeat and the unbridled joy that victory brings – continues to be the inspiration for journalists contesting the Outstanding Sport Reporting Award sponsored by ANZ Stadium,” Mr Dulhunty said.

“The Kennedy Foundation is extremely grateful to again have the support of ANZ Stadium, which for the past four years has supported the very best in sports writing, talent that emerges annually at the Kennedy Awards.

“The sports writing category is always hotly contested and acknowledges exceptional coverage of sport, its competitors and its teams – writing that satisfies a public demand for the daily quality sport ‘read’.”

ANZ Stadium has again offered an outstanding prize for the winner of the Outstanding Sport Writing Award with the victor to receive:

· A fully-catered 8-seat open corporate box at a 2017/18 event of their choice at ANZ Stadium (*subject to availability).

ANZ Stadium General Manager Media & Communications, Arthur Stanley, said it was a privilege for the stadium to sponsor the Outstanding Sport Reporting Award for the fourth consecutive year.

“This award recognises the talents of the finest sports journalists in Australia – media professionals who will have drawn inspiration from the drama, passion and emotion of the many sporting battles won and lost at ANZ Stadium over the years,” he said.

“Everything from the magic of the 2000 Sydney Olympics and Cathy’s gold-medal run, to the exhilaration of the Socceroos’ World Cup qualifications, to 107,000 voices singing Waltzing Matilda at Bledisloe Cup, to unforgettable NRL Grand Finals, fantastic State of Origin encounters, through to visits by English Premier League giants such as Manchester United, Chelsea, Liverpool and Arsenal.

The NRMA Kennedy Awards for Excellence in Journalism, named in honour of legendary Sydney crime reporter Les Kennedy who died aged 53 years in 2011, continue to recognise our finest media professionals and those who have put so much back into the industry.

The awards are supported by the Kennedy Foundation, a registered charity to administer a benevolent fund for media professionals facing hardship as well as to other charitable organisations.

The presentation of 33 awards this year will culminate with the announcement of Coca Cola Journalist of the Year, the richest prize in Australian journalism.