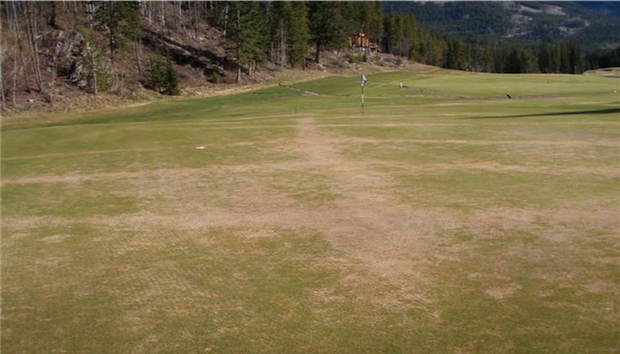 Running from March 22-23, the seminars looked at possible unidentified problems that can occur on golf courses internationally.

Superintendents and greenkeepers on a golf course are expected to have all the answers when it comes to surface issues on greens, but sometimes they need to know the right question to ask. Pat McHugh urges people to ‘look downstairs’ to find the root of the problem.

With more than 40 years in the golf industry, McHugh now works as an international turf consultant for Floratine; specialising in turf nutrition and the physical and chemical properties of soil and water.

In each talk, McHugh focused on gas damage on a golf green and how to repair it without ripping up a green and starting again.

McHugh showed photos from different courses in the US and Canada that he had worked on to help find solutions where it seemed there was none.

Sometimes courses will go years trying to source the problem, running through their checklists to figure out how to fix damaged greens, McHugh explained it is important in this case to inspect the materials your greens were built from, or even the drain lines surrounding the damaged area.

In his consultancy work, McHugh uses a ‘camera snake’ to inspect the ‘downstairs’ of a golf green. He showed some of this footage to guests at each seminar and what was most interesting, was each situation called for different problem solving or method of solution, but all of them came down to gas damage from something going wrong under the surface.

It was also clear from some images McHugh showed where gas damage was visibly running parallel to the drainage systems in part of a green.

An important takeaway from this event was a course’s drain system could be just as detrimental as it can be beneficial when not working properly, and a poorly placed outflow pipe can be the catalyst for gasses developing in drain lines.

One particularly interesting case was at a golf course in Canada that had seen issues on one green for 17 of its 19 year playing life.

After the club decided their only option was tearing up the green and reconstructing, McHugh and his team went in with their camera snake to find there was a significant amount of water being held in their drain tile.

The water logging was caused by an oversight in architectural planning when the green was extended years earlier.

McHugh told guests had this course re-constructed the green; they would have only come up against the same problems again because they hadn’t found the true root of the problem.

After looking downstairs, McHugh and his team were able to drain out the water, and repair the green without the need of a complete reconstruction.

McHugh explained in his talk how a 4-way ventilated drain is usually the best option for most gas damaged greens that need drain line or outflow repair.

He noted how a T-shape ventilation method won’t always do the trick because some gasses are thicker than the oxygen needed to get through.

Most attendees remarked at the findings shown by McHugh, saying they could all think of at least one area on their course they could inspect underneath for similar problems.

Pat McHugh offered great insight and knowledge to all guests that attended any of the four seminars held this month.

We thank him for his time and also thank Floratine and Applied Agronomics Australia for letting us attend!