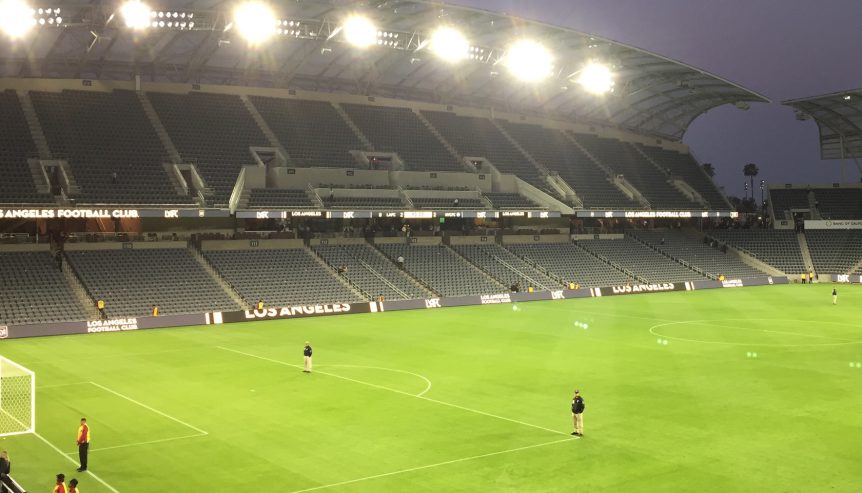 A boisterous crowd of 9,387 fans filled the stands at the boutique Dolphin Stadium in the Northern Brisbane suburb of Redcliffe to witness a spectacular seven goal thriller which featured hat-tricks from both Jamie Maclaren and Roy O’Donovan.

The same crowd at Suncorp Stadium would have left over 40,000 seats empty. You could be the best supporters in the world but making an atmosphere in that kind of situation is harder than finding a way past Mat Ryan in 2022 World Cup qualification: most of the time, it just can’t be done.

Bigger is certainly not better as Sunday showed. The fans that turned the Dolphin Stadium orange provided the perfect backdrop to a thrilling game as well as an exciting atmosphere that understandably grew in the latter stages. Not just that, to someone like myself watching from overseas, it looked like a football game that was taking place in Australia and that is something that should be welcomed.

As an advertisement for the A-League, it could not have gone much better.

And a stronger argument for the use of smaller stadiums could not be made. It is not a new debate. Indeed, the Crawford Report of 2003 recommended that intimate arenas were the way forward for Australia. Former FFA CEO John O’Neill said in 2005, “The point about boutique stadiums is not lost on us.” Not lost but seemingly misplaced.

And a stronger rebuke for the Stadiums Queensland Taskforce report would also be hard to find. That study recommended last December that Brisbane didn’t need any new stadiums and that Suncorp was sufficient.

“There is current capacity for additional content within the existing venues,” the report said. “It is more fiscally responsible and viable for the State to maximise the utilisation of Stadium Queensland’s existing major sporting venues instead of constructing, managing and operating new assets.”

Capacity there may be, the problem is of what kind. Suncorp Stadium is a great place for the right game but more intimate options are often needed. The report did not talk about what really matters in sport – the experience. This is especially true in football, a sport that creates a unique atmosphere.

In Australia, there are endless comparisons of the standard of the A-League to that in Europe and an understandable desire to improve the quality of football on offer. Quality is important but in my experience but the atmosphere makes a huge difference in  attracting new fans to stadiums and ensuring they come back.

There are good, bad and indifferent football games – always have been, always will be. No team comes back from 3-1 to win 4-3 every week. It is the atmosphere that really grabs hold. If your first game is a boring one in an empty stadium then you may decide to subsequently spend your hard-earned cash elsewhere. But a boring game in a bouncing stadium with air that is electric and you just may become hooked.

When a stadium is full, it is much easier to make this atmosphere and when the stadium is smaller it is obviously much easier to fill. The point, obvious and often made but worth repeating, is that it is infinitely better to have, say, 15,000 in a 15,000 capacity stadium than 15,000 fans rattling around a 50 or 60,000 capacity in arena that can take up  a fair percentage of a club’s budget just to pay for.