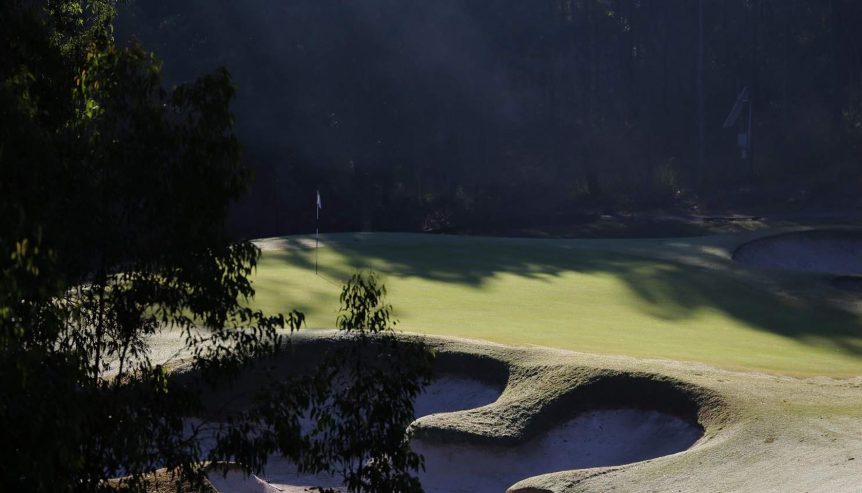 For most of us, 6000-metre 18-hole golf courses are more than long enough to test our skill.

And for the vast majority of us, playing a course from the ‘tips’ will actually make a round less enjoyable.

But if you’re on a quest to find a brutally long golf course, you’ll find this list of 25 of Australia’s Longest Golf Courses very useful.

The Grange’s West Course is preparing to again host the Women’s Australian Open in 2019 but its East Course (see 14th hole below) is the longer of the two layouts.

The Vines Golf & Country Club – on the outskirts of Perth – shot to fame in the early 1990s as the host venue for the Heineken Classic. Pictured below is The Lakes Course’s famous par-five 18th.

A host venue of the former Canon Challenge, Terrey Hills Golf & Country Club is located in a suburban pocket of the Ku-ring-gai Chase National Park in northern Sydney.

Not only is it long on the scorecard, Brookwater Golf & Country Club is one of the hilliest courses in Australia. Carts are advised at the spectacular South-East Queensland layout.

Lake Karrinyup is probably the most famous course in Western Australia having hosted many professional events including the World Super 6 Perth, Johnnie Walker Classic and four Australian Opens.

A stern test from the back tees, Sanctuary Lakes’s 18-hole course opened for play in 2000 and winds through a housing estate in Melbourne’s west.

Formerly a 36-hole facility, Capricorn’s Championship Course opened for play in 1992 and was designed by American Karl Litten.

One of the great Melbourne sandbelt golf courses and host venue for the 2018 World Cup of Golf. The fast, carpet-like fairways at ‘Metro’ often make the course play shorter than its length.

Widely viewed as the premier golf course in South Australia and recently under the golf spotlight as the 2017 Women’s Australian Open host venue.

The less heralded of the two courses at The Vines. Seven holes of the composite course used for the Heineken Classic were from the Ellenbrook Course while 11 came from The Lakes Course.

Eastern Golf Club – which relocated from suburban Doncaster to Yering in 2015 – is a 27-hole facility with holes 1 to 18 comprising the South Course.

Only 20 minutes’ drive south of Geelong, The Sands in Torquay is a great place to start a Great Ocean Road golf trip.

Designed by Greg Norman & Bob Harrison and part of The National’s astonishing 54-hole site on the Mornington Peninsula.

Hidden Valley is about an hour’s drive north of Melbourne between the towns of Wallan and Kilmore and its 18-hole golf course was designed by Australian golf icon Craig Parry.

About an hour’s drive south-east of Melbourne’s CBD. Designed by Greg Norman, Settlers Run is known for its sandbelt-style bunkering.

Located in the Southern Highlands about 90 minutes’ drive from central Sydney, Mt Broughton Golf and Country Club opened in 1994.

The only Arnold Palmer signature golf course in Australia and significantly longer than the brilliant Palms Course at Sanctuary Cove.

Perhaps Australia’s most exclusive golf course, Ellerston is on a private Packer Family property in the Upper Hunter Region.

Click here for the top 5 longest courses in Australia