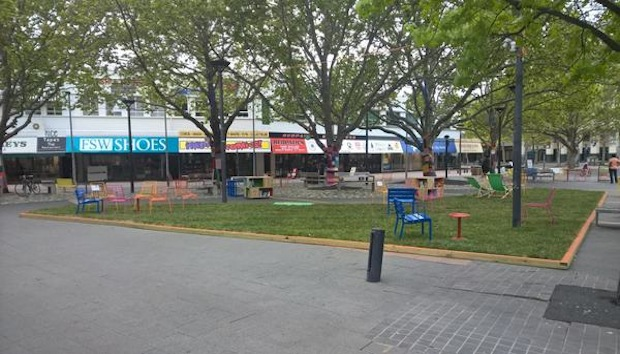 An experiment to show Australian’s reactions to turfed areas showed they definitely have a preference for turf over paved areas. In fact, turf was eight times more popular than paved areas when they were placed side by side in a pop-up experiment in Canberra recently.

Quality green space, including lawn and turf areas, featured prominently in a number of fixtures as part of the 50th anniversary celebration of the Australian Institute of Landscape Architects (AILA) group in Canberra last week.

The 2016 International Festival of Landscape Architecture was themed with the slogan, “Not In My Backyard” and was aimed at connecting the public with landscape architects through activities and public activations throughout Canberra.

Turf Australia was involved with the ‘Backyard Experiment’ which saw the city centre’s paved Garema Place greened with turf and the public’s reactions to the set-up captured and used to examine how Australian’s react to green space.

The outcomes were astonishing with the green space eight times more appealing to families, visitors stayed up to three times longer, and it attracted almost twice the foot traffic.

The #BackyardExperiment project was developed by June Boxsell of Street Furniture Australia (SFA) in conjunction with the Australian Institute of Landscape Architecture (AILA) and Context Architects of Sydney. It was also supported in its construction by Turf Australia, Lawn Solutions Australia and Horticulture Innovation Australia.

The project centred on a hard-landscaping area in the middle of Canberra’s CBD and was aimed at finding out – with the help of video and time-lapse-photography – just how the addition of softer-green-space and landscaping elements of quality lawn and street furniture would make to public visitation and use of the area.

Time lapse cameras observed the pop-up-park installation over a 10-day period and the production of a video is now underway to present the outcomes and conclusions of the experiment.

Ms Boxsell is currently in the process of preparing a technical report and compiling video footage of the two-week experiment, but says her preliminary findings were “… far beyond our expectations”.

“It’s early days yet and once we get this information into the right hands it will be tremendous for turf and our furniture elements in urban design.”

The BackyardExperiment was one of 30 developed by AILA over the four-day program, which also included its annual conference, the National Landscape Architecture Awards, a Festival Party and a host of public and industry tours, exhibitions, city activations, screenings and talks.

Further information on the BackyardExperiment and its outcomes can be found at www.aila.org.au/iMIS_Prod/NIMBY/ProgramEvents/Backyard_Experiment.aspx