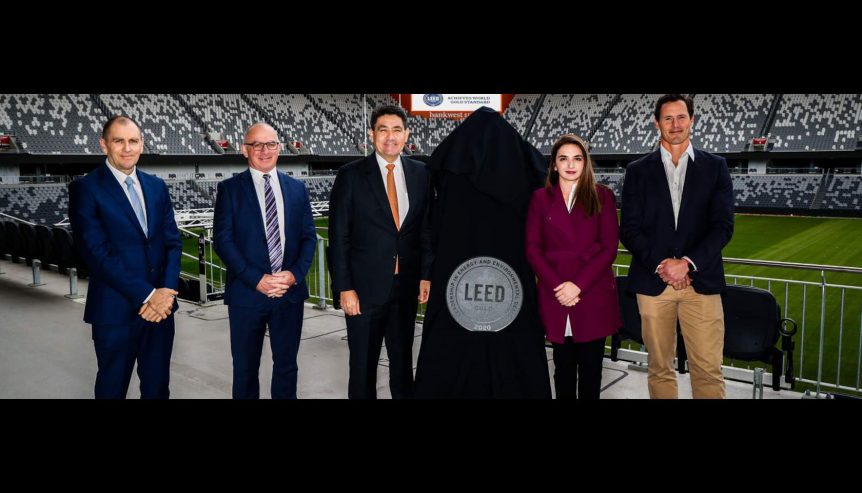 Bankwest is the first stadium in the world to announce it has achieved LEED v4 Gold Certification from the US Green Building Council.
Acting Minister for Sport Geoff Lee said the gold certification recognised Bankwest’s high performance in innovation, water savings, energy efficiency, transportation options and materials selection during construction.

“Bankwest Stadium has been a game-changer for sports fans and players but this world leading achievement in sustainability shows it is much more than just a great place to watch footy,” Mr Lee said.

“This stadium was not only designed and built with the spectator in mind, but also the local environment, the local community and the industrial heritage of Parramatta and Greater Western Sydney.”

“We have helped deliver a world class stadium in every sense – merging unrivalled design, construction and operation to create the ultimate fan experience,” said Ms Perosh.

Bankwest Stadium CEO Daryl Kerry said: “To receive this certification is a real testament to the enormous amount of work that went into the design of the stadium and the way the stadium operates on an environmental sustainability level.

“Bankwest Stadium was built for the fans, but it was also built to operate with very minimal impact on the environment.”

“Right from the start of the project we’ve had the fan experience and the environmental impact of the Stadium front of mind and we’re proud to receive this certification today.”

LEED, or Leadership in Energy & Environmental Design, is a rating system that covers buildings, homes and communities that are designed, built, maintained and operated to a high environmental performance.