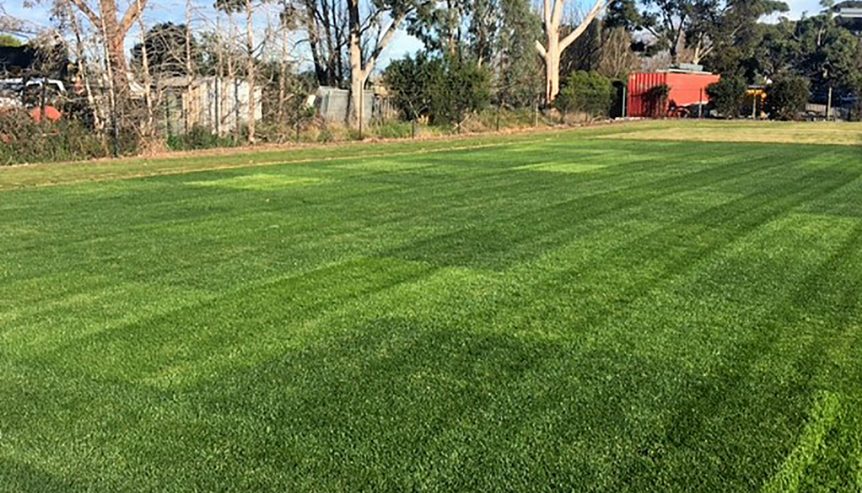 Sports turf is set to take a giant leap forward in Australia thanks to the introduction of Barolympic, a new ultrafine perennial ryegrass from Barenbrug.

While autumn 2020 will see the first widespread commercial use of Barolympic in Australia, local trials have already reinforced the quality breeding and research which has taken place globally, including in UK, where it has been the top performer in sports trials.

The variety has also been trialled at a major soccer venue in Melbourne in a blend with Premier 3Ò and the results were exceptional.

Barenbrug Turf Portfolio Manager, Matt Merrick, says Barolympic sets a new standard for fine turf that can maintain excellent density under high wear and can be mown down to five millimetres for golf situations.

Importantly, two of the best independent consultants in Australia have endorsed Barolympic through rigorous trial work.

In Victoria, it was the number one grass out of 29 varieties assessed by John Neylan over winter.

“In addition, industry people from major sports fields and councils assessed the unlabelled plots, and the majority chose Barolympic as the best variety.”

In an independent Queensland trial conducted by Matt Roche of Australian Sports Turf Consultants (ASTC), Barolympic was the best performer in early gemination and density where relative humidity levels were 81.4 per cent.

“It was then rated the best overall performer in terms of quality at the completion of the 18-week trial,” Mr Merrick explains.

Barolympic will be supplied into the Australian market in a mix with Premier 3, a combination which was the top performer in the northern trial in terms of percentage ryegrass coverage, winter sown into Wintergreen couch (Cynodon dactylon). “We wanted to trial Barolypmic in both the north and south, just to look at early establishment in heat, overall coverage and performance over winter,” he explains.

“A lot of sports fields start the over-sowing process quite early in preparation for the start of football in winter, and it performed admirably in both regions, which means that it can be used anywhere in Australia with confidence.”

Having worked in the industry for 20 years, Mr Merrick says he hasn’t seen a grass as fine and dense as Barolympic before.

“It does this while maintaining turf density, which is essential for wear tolerance throughout winter, and of course recoverability.”

To request an interview with Mr Merrick, or for any other media enquiries, please contact Peter Sullivan 0448 903 317.