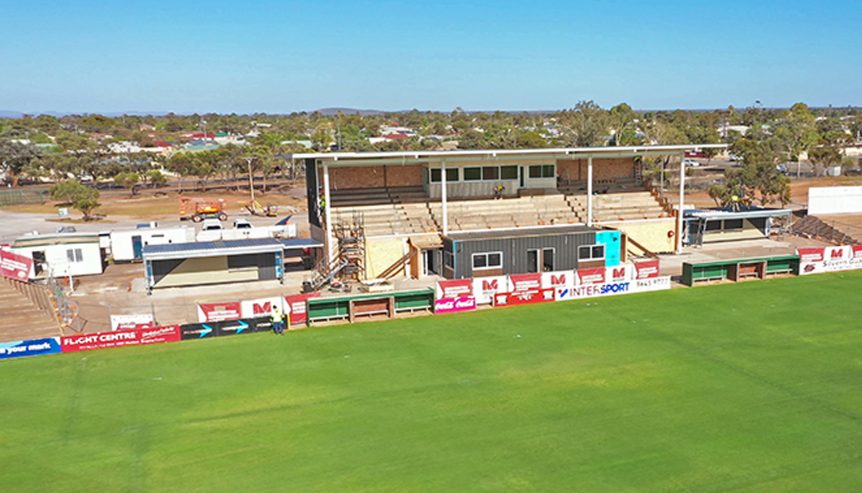 The Bennett Oval redevelopment is approaching the finishing line with handover of the facilities scheduled for February 19 this year.

Regular site meetings between City of Whyalla officials and the building contractor Mossop Constructions show the project is well on track for the Marsh Community Series AFL pre-season match between the GFG-sponsored Port Adelaide and the Western Bulldogs on March 7.

Acting CEO Kristen Clark said Council had a dedicated team working on the oval surface and the project management of the grandstand and facilities redevelopment.

“The oval is looking great and would have been ready for an AFL game on Christmas Day,” Kristen said.

“We had a lot of people, who fly in to Whyalla, say they see the oval from the air and they’ve never seen it so green.

“That was always the plan to have the surface ready early and that has involved new irrigation and bringing the grass up to scratch.

With the bar and canteen buildings now in place and being fitted out, Kristen confirmed there was just a couple of weeks to go in the redevelopment of the oval’s facilities including the grandstand changerooms, new showers and toilets, public toilets and a DDA (toilet for those with a disability) amenity.

SEATING INSTALLED: One of the new changerooms under construction at Bennett Oval.

“The new bar and canteen buildings are now in place and we are scheduled to get the keys to the oval on February 19,” Kristen said.

“It has been a fantastic effort from Mossop Constructions, Council staff and many local contractors to get this project off the ground so quickly, on track so smoothly for this big AFL game in Whyalla and for future uses of this magnificent oval and facilities.”

INCLUDING THE SINKS: The entrance to the players’ shower and toilet facilities.

General admission tickets are now on sale for the big Marsh Community Series AFL pre-season match between Port Adelaide and the Western Bulldogs at Bennett Oval in Whyalla on March 7.

Deck chairs are allowed (because there is no permanent seating at Bennett Oval). Umbrellas are not allowed to be used if they obstruct the view of others.

Note: There are no reserved seats at Bennett Oval. Children under 15 are free but you must still book them a ticket online.