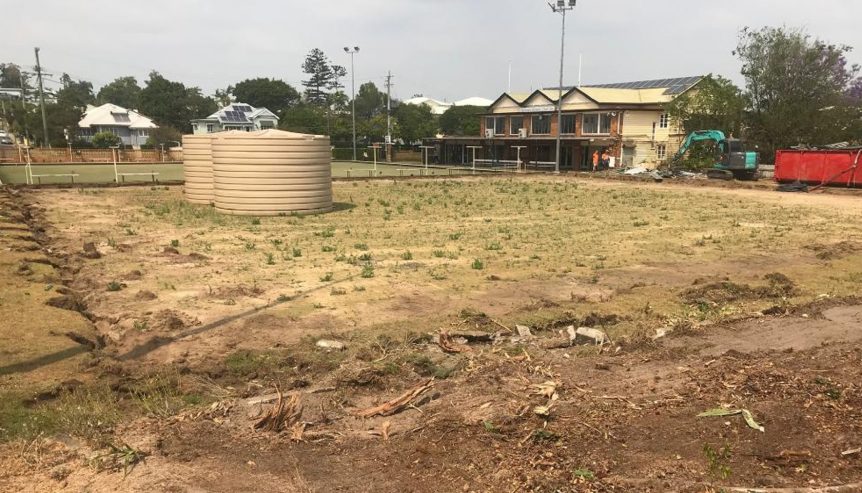 Southside residents are devastated after Brisbane City Council allowed developers to rip up a heritage-listed bowls green despite going to court to save the century-old icon.

Councillor Nicole Johnston (Tennyson) said Council granted a Heritage Exception Certificate to developer the Lennium Group Pty Ltd, without public consultation or notification of her office, for unknown reasons and at an unknown time.

The memorial Dick Biddle bird bath, dating back to 1942, was dismantled after excavators moved on to the site on Tuesday morning, water tanks were dumped on the heritage listed green by workers using heavy machinery, all gardens and trees were removed and the decorative fencing was damaged.

“The scoreboard and seats which formed part of the fabric of the Macgregor Green — the 106 year old heritage listed bowls green — were removed and destroyed,’’ Cr Johnston said.

“Heavy machinery drove over the green to dump the water tanks. I presume that this was not within the scope of the Heritage Exemption Certificate.’’

“It’s inconceivable they have allowed the destruction and relocation of significant heritage features of the Yeronga Bowls Club, contrary to the council’s own heritage citation and the recommendations in the court judgment.

“Council must immediately revoke this heritage certificate and undertake an urgent investigation into how this occurred.

“I am completely shocked and appalled that after two and a half years in court trying to protect the Yeronga Bowls Club, including the heritage listed structures and Macgregor Green, an appeal Council, residents and I fought hard to win, a Council officer in the heritage team in the City Planning Team has now allowed this, with no notice to anyone and no consultation.

“Actually, I am disgusted. No one has been able to give me a straight answer.

“This site is 106 years old, the court’s judgment was extremely clear about the significance of the MacGregor Green and its heritage listed features.

“The destruction of the fountain, fence, gates and green, all specifically referenced for their significant cultural and sporting heritage in the heritage citation is truly unbelievable.’’