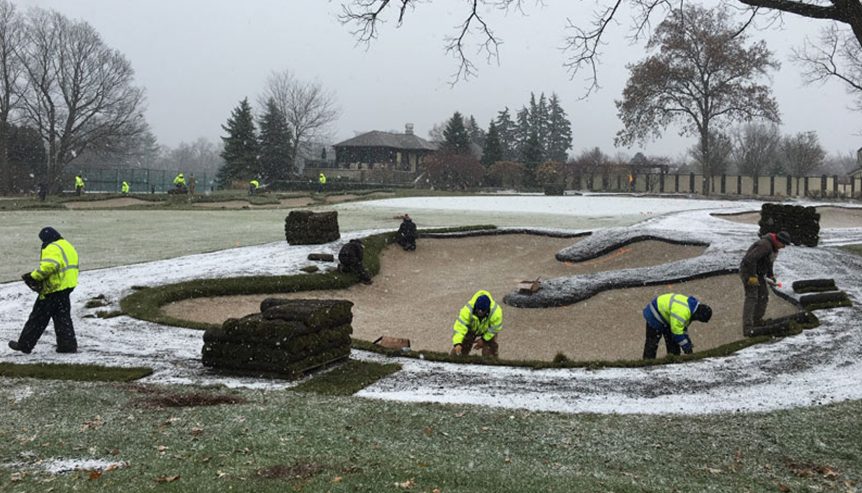 Editor’s note: This article was originally published in the July 2019 issue of On Course, the monthly publication of the Midwest Association of Golf Course Superintendents.

Many of members of the Midwest Association of Golf Course Superintendents have recently redone their bunkers or are in the throes of redoing them now. Knowing there is no right or wrong way to complete this process, we surveyed nine members to find out their processes, material selections, and tips for others in the planning phases of a bunker redo. (Many thanks to those who participated in my quest for information — your willingness to help a fellow member is well appreciated.)

Age of bunkers: It varies. Some are 25 years old and were part of the original construction.

Scope: Ongoing renovation of all bunkers. Fifty-one have been completed out of 101. Most bunkers have new drainage installed (as needed).

Sand: Meyer mason construction sand was used and was chosen because of native color. The course is looking at using Pioneer bunker sand in the future.

Contractor: Hollembeak Construction for gravel installation and polymer application. Some phases of the project have been done in-house, such as drainage, removal of old sand, and the addition/installation of new sand.

Advice: If installing the Better Billy Bunker System, still add a herringbone drainage pattern — it helps with washouts. After heavy rains, we’ve seen where the sand washed down until it hit the 4-inch tile.

Scope: All bunkers were redone in 2016. All sand and drainage were replaced in 83 bunkers, which total 61,000 square feet.

Liner: None — the bunkers are flat and do not wash out. We did not want a liner to interfere with drainage performance. We used 2-inch micro-slit drain tile and backfilled trenches with bunker sand.

Advice: Make sure greens really do drain away from bunkers — go look during rain events. It is difficult to keep white sand white, especially on a treed golf course with different sources of tree litter and grass clippings.

Age of bunkers: The bunkers were fully redesigned and reconstructed in 2004.

Scope: We started in the fall of 2018 and are wrapping up the complete project — bunkers, irrigation system, a few minor fairway expansions/collection areas, improved drainage in some problem areas — now. In addition to some slight modifications to a few bunker “fingers,” the old sand, liner, and pea gravel was excavated and replaced. The existing drain lines (from 2004) were pulled, cleaned, inspected and replaced back into the existing trenches. One new bunker was added, bringing our total to 96 bunkers/150,000 square feet.

Architect: Rick Jacobson (our architect) helped us recapture and tweak the 2004 bunker edge.

Advice: The year or two leading up to your project, identify and document precisely (with photos/video) the bunkers that “wash” or have water flowing into them from outside. Have the contractor make the necessary modifications in grading around the bunker and/or add the necessary basins to remediate the problem.

Scope: The club decided to reconstruct our bunkers in conjunction with our greens project, both of which were completed in 2017. The old bunkers were 18 years old, severely flashed, with a fabric liner and local sand. Though they had performed well throughout their life span, the sand and fabric started to fail at the same time.

Advice: Whatever system or combination of sand/liner/drainage you use, it’s important to let members select what they like from a playability standpoint, but allow them to choose only from systems that work. Don’t give them a choice of something that is unrealistic, unknown or difficult to manage. Realize that once the new system is installed, you’ll have to adjust your practices to manage playability — that’s part of the project.

Age of bunkers: Very old. Some were from the mid-1980s, and some were from earlier than that, as evidenced by the use of clay drain tile.

Scope: St. Charles chose a complete reconstruction from the ground up. All the bunkers were completely rebuilt and have a new architectural style. We began in the spring of 2016 and completed the remaining 12 holes of bunkers in August 2019. We decreased from 110,000 to 60,000 square feet of sand in 52 bunkers (from 59 bunkers).

Liner: None. This was largely a cost-saving measure as well as a practical one. I didn’t want to deal with staples heaving out of the ground each winter, or tears in fabric, or have to jackhammer out concrete/aggregate liners in the future.

Sand: Pioneer. Our membership didn’t want to transition to a different-colored sand over a long-term, multi-year project. The choice was made to use an improved-performance sand with a similar color to the existing bunker sand.

Advice: Build bunkers that don’t allow water to shed into them. Put in as much drainage as you can afford. Build bunkers so they’re easy to maintain — easy to mow/spray/rake/edge. Use a plate compactor once sand installation is complete to immediately firm the sand. Hand-rake if at all possible. Choose sand that drains well but remains firm.

Scope: Redesign of all bunkers as well adding additional bunkers. All new drainage inside and tied into existing drainage where possible over the course of 2017 to 2019. We’re flashing the faces with more subtle sloping, with player-friendly designs. The bunkers are a part of a course renovation that includes new greens, new turf on fairways, the addition of elevated family tees, a driving range extension and more.

Sand: Pro/Angle. We liked the way it performed at other clubs.

Advice: Use a liner such as Capillary Concrete or Better Billy Bunker no matter the sand selection or type. Washouts will still exist if surrounding soil grades do not redirect heavy rainwater runoff away from bunkers, so if at all possible, expand your scope to include this part of the rebuild.