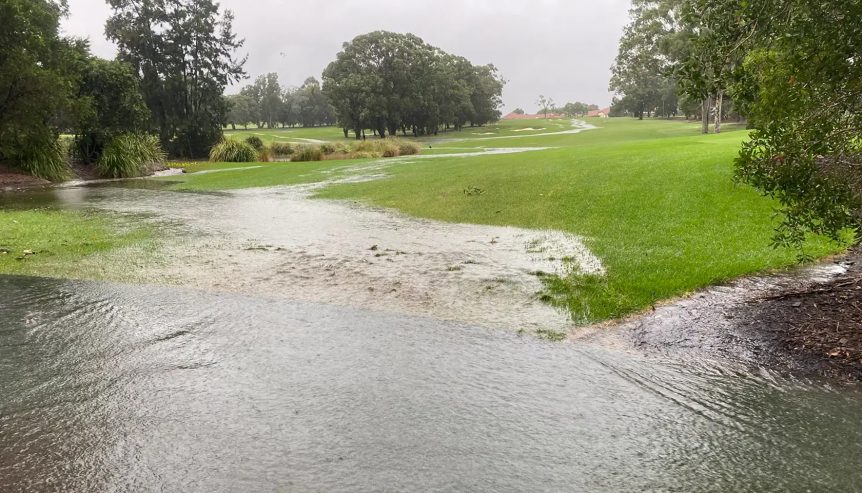 Give or take a few millimetres, Concord Golf Club has essentially had Geelong’s annual rainfall since March 14.

But when the Golf Challenge New South Wales Open tees off on Thursday morning, it will – remarkably – be business as usual.

In fact, Concord superintendent Chris Howe was so comfortable that his western Sydney layout will stand the torrential test being thrown at it that he even took five minutes away for a quick chat.

“We’re expecting it to stop raining later today, so draining tonight, drying tomorrow and we’ll be right to go by Thursday morning,” Howe said with great pride after 390mm of rain in the past nine days.

It’s partly hard work, but it’s also testament to the world-class technology under the greens and bunkers at Concord, which only had its Tom Doak-inspired redesign open in April 2018.

The 69 bunkers at Concord now use the “matrix system” – essentially a layer of porous asphalt between the bunker sand and the drainage gravel that is the conduit to traditional drainage lines – are already “good to go”, Howe said.

“We had to repair six bunkers after erosion, but the other 63 are essentially fine. You’d rake the base and call them good.

“And the repairs are fine, too. The sand integrity hasn’t been compromised by exposed clay faces, so you wouldn’t even know.”

The greens are almost totally unaffected. They are built to a USGA profile – 300mm of sand on a 100mm gravel layer – and despite 345mm of rain since just last Thursday will be running at a tournament friendly 10 on the stimpmeter when the first putts are hit in anger in just two days.

“By Sunday, if it stays dry, we’ll have them running at 11.5-12 again, which is what we would have wanted anyhow.

“Don’t get me wrong, the fairways are wet and we haven’t had any practice yet, but they’ll dry out pretty quickly and we should be back out there (the players in preparation) tomorrow.”

This confidence is well founded.

Howe has been working at Concord for 26 years and had known nothing of such rainfall … until last year.

In fact, the “east coast low” that effectively ended the enormous NSW bushfires of 2019-2020 dumped 470mm of rain last February.

Howe said his crew would likely be unable to mow the fairways until after play on Friday, or maybe even on Saturday morning.

“We’ll get the tractors out when we can, but it’s almost like a watch and act from the fires.

“We’re actually expecting it to be hot and humid tomorrow which brings its own challenges, but we’d expect a quick evolution.

“The course will come into its own again by the weekend.”