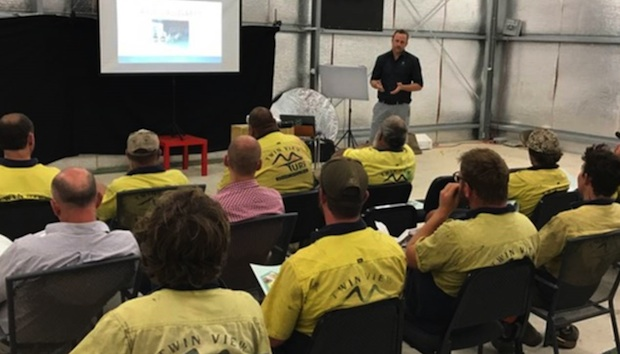 There’s more to just watching the grass grow with Australia’s only national turf certification program AusGAP, says the program’s Compliance Manager Nick Dorney when announcing their next application round recently.

“Watching grass grow is actually a big part of the AusGAP certification program and we’ve worked with international turf breeders and researchers in some intensive training to help us identify just what we should be looking for in our inspection regimes,” Dorney says of the program.

“AusGAP stands for Australian Genetic Assured Purity and that’s exactly what we’re looking for in our AusGAP accredited turfgrowers’ paddocks.”

“We’re after consistency of the particular turf crop – we want it to be true-to-type with no evidence of contaminant grass-types and overall any weed infiltration should be minimal. We’re looking for differences in any seed head, colouration, growth rates and general appearance so that we know that what’s growing at each of our farms is an exact replica of the original plant it’s been bred from,” Dorney explains.

Most Australian turf types are warm season clonal grasses and as such are predominantly creeping or stoloniferous grasses, having rhizomes and stolons – the runners that make these grasses so durable and self-repairing.

The unique feature of these grass types is that – as the name suggests; being clonal they are identical replicas or clones of the original plant and are propagated vegetatively, where a small section of stolon will reproduce a replica plant. This is the method employed to establish new turf paddocks and in some cases on site where ‘stolonisation’ or ‘sprig planting’ (breaking up the turf and planting in small pieces) is undertaken to establish the new plot.

In essence, the parent plant as a section of solid turf is broken up into smaller parts and regrown from these sections as genetic replicas of the original.

Genetic testing has been carried out in many cases to corroborate the genetic purity and what can be an expensive test in most cases confirms what AusGAP has helped facilitate in practice.

The AusGAP program works with breeders and turfgrowers to help maintain that the turf-type that is specified or ordered is in fact the original grass-type that was bred and carries that brand.

Far too often there can be circumstances where turf-types can be substituted or a cheaper, generic turf variety used for jobs and then fail over time; often due to the lack of specific benefits or traits that are inherent in the originally requested, true-to-type variety.

AusGAP claims it is the missing link that helps resolve issues of turf impurity, poor turf quality, or problems associated with non-specified turf, so the customer and end-user ultimately get what they paid for.

AusGAP is described as a ‘whole-of-chain’ turf quality assurance program, from early grow-in phase, right through to the delivery of the turf.

“From the early breeding stages through to expanding-out the turf-type to what we call ‘foundation farms’, AusGAP is intimately involved. From new paddocks to the grow-in of new plantings and then the turf quality towards harvest time; they are all rigorously inspected on these farms in line with AusGAP quality-protocols before being approved for greater expansion to other member turf farms,” Dorney explains.

“Again on these farms the inspections are quite thorough; before and during grow-out of the new turf-types and then again prior to harvest,” he says.

“These farms can only become accredited and certified if their turf growing capabilities are up to standard and a whole raft of other aspects of their operation are beyond reproach.”

AusGAP describes its focus as being firmly on the turf-purity side of things and the whole process of how this comes about; from turfgrowing through to the machinery and equipment, the work health and safety aspect, to the turf quality at harvest and delivery – even in the sales and after-sales of the turf products, AusGAP scores the operation and offers certification only to those that pass the benchmark.

“AusGAP certified Turfgrowers, of which there are now around forty from Lawn Solutions Australia that have achieved this standing in Australia, have been through a stringent two-year inspection, reporting and sometimes rectification regime in order to progress to the certification status,” Dorney says.

“We want to make sure that these growers are ‘beyond par’ when it comes to the quality of the turf products they offer for sale and ultimately the customer and end-user are specifically getting what they paid for.”

AusGAP is currently accepting its next round of applications to join the Lawn Solutions Australia tranche of growers that have successfully completed their first stage certification through the AusGAP program.

Further information regarding the AusGAP Turf Accreditation Program can be found at: