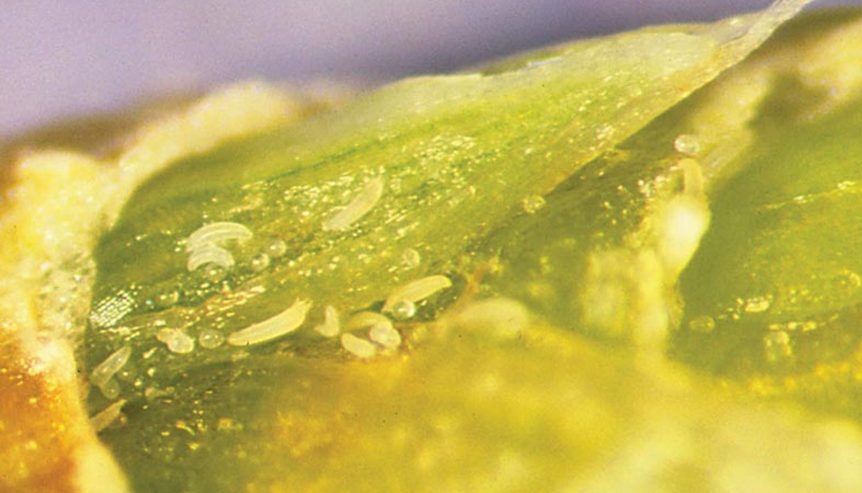 Little is known about this pest and how its damage can be prevented. Here, a look at potential controls, plus summaries of current and future research.

Figure 1. Bermudagrass mites are difficult to see with the naked eye (both of these photos were taken under a microscope), but their damage to turf is obvious. Photos by David Shetlar

The bermudagrass mite inflicts significant damage and produces numerous challenges to management of bermudagrass turf on golf courses, sod farms, athletic fields, lawns, hayfields and pastures. It is distributed in the southern part of the continental United States, from North Carolina to California. Its reach is worldwide, with reports of damaged turf from Australia to South Africa. This pest is truly challenging, not only because of how little we know about it, but also because of confusion about what we think we know.

If you look up the word “confusion” in a dictionary, you might find a picture of the bermudagrass mite. Let’s start with its scientific name. As recently as this year (1), American scientists accepted Eriophyes cynodoniensis (Sayed) as the scientific name for bermudagrass mite. Previously, the same species had been identified as Aceria neocynodonis Keifer in Australia, the United States and elsewhere. The name accepted by the International Commission on Zoological Nomenclature (ICZN) is its original name, Aceria cynodoniensis Sayed (7).

We are of the opinion that the name accepted by the ICZN should be the proper name, but many turf managers and pest management practitioners believe the argument about its proper scientific name is just a case of splitting hairs and has little practical purpose. In this article, we refer to this pest as the bermudagrass mite. Other common names are bermudagrass stunt mite and couch grass mite.

This controversy can be resolved with modern genetic tools, which can trace the origin of multiple populations to a general area. Why is this important? Once we know the bermudagrass mite’s place of origin, we can explore that area in order to identify and import natural enemies that attack only the bermudagrass mite. This classical biological control approach, if successful, may help control bermudagrass mites in the United States and elsewhere.

The greatest confusion — and the one with the greatest impact on effective management — concerns the biology of the bermudagrass mite.

The bermudagrass mite is an eriophyid mite. Similar to its eriophyid mite cousins, the bermudagrass mite is tiny (adults are 0.006 to 0.008 inch or 0.16 to 0.21 mm long). The mites are banana- or cigar-shaped, translucent or whitish-cream in color, and have two pairs of legs (Figure 1, above). Eggs are spherical, translucent and about 0.002 inch (0.06 mm) in diameter. Nymphs develop through two instars (protonymph and deutonymph), with one resting period (nymphochrysalis or imagochrysalis) after each instar. All life stages, often in populations numbered in the hundreds, are found between stems and leaf sheaths.

Each female bermudagrass mite produces 50 eggs, which hatch in two to three days (4). Development from egg to adult takes about one to two weeks, with the developmental time shortened during summer and in warmer locations. Bermudagrass mites are most active and cause the greatest damage during spring and early summer, but they are active year-round in a favorable environment such as that of southern Florida, where the weather is warm and a continuously growing host is available.

The overwintering habits of bermudagrass mite are unknown. Most eriophyid mite species overwinter as females (called “deutogynes”) in sheltered parts of their host plants. The bermudagrass mite probably overwinters underneath the leaf sheath, which provides protection from the cold temperature and frost. This is, however, only a guess.

One fact is certain: The bermudagrass mite only feeds on bermudagrass. Both common (Cynodon dactylon) and hybrid bermudagrass (C. dactylon × C. transvaalensis) are susceptible, but they exhibit varying degrees of symptoms among cultivars (described below in the section “Resistant bermudagrass cultivars”).

Right: Figure 2. A comparison of Celebration bermudagrass terminals damaged by the bermudagrass mite (top and middle) and a healthy terminal (bottom). Photo by JC Chong

Witches’ brooms appear within 13 days of feeding (5) and are caused by permanent shortening of internodes. The mechanism by which mite infestation causes the shortening internodes is uncertain. Does the mite inject a toxin or growth regulator during feeding, or does it transmit a virus to the host? No study has conclusively demonstrated the mechanism. We also cannot develop a treatment threshold without knowing how many mites per stem are required to cause the witches’ brooms.

Terminals stunted by witches’ brooms fail to grow and recover from the damage. These stunted terminals often die in winter, and the damaged stems and stolons do not produce new shoots. Eventually, the infested turf becomes thin, and bare spots begin to appear (Figure 3, below).

As infestation continues, the bare or thinned patches expand and coalesce. The most severe damage often appears on the slopes and at the edges of bunkers, suggesting that the severity of damage may be closely related to moisture stress. Without reducing or removing the infestation in the surrounding turf, resodding the dead patches with bermudagrass (regardless of the cultivar) often results in the decline of the replacement sods over time.

Damage by the bermudagrass mite may exacerbate other pest problems. Weeds often invade thinned and bare patches (Figure 3), and mite-weakened turf is more susceptible to attacks by bermudagrass scale, nematodes and Helminthosporium diseases (that is, leaf spots caused by Drechslera and Bipolaris).

Monitoring
Scouting for bermudagrass mite infestations is achieved by surveying for the classic symptom of witches’ brooms, which is different from the damage caused by other mite species that attack bermudagrass (7).

Careful scouting for witches’ brooms should begin in areas where the bermudagrass turf appears stressed or thinned. However, plant responses to nematodes, root diseases or moisture stress can be superficially similar to bermudagrass mite damage, and witches’ brooms do not always appear in some cultivars (for example, Tifway) despite infestation. Therefore, bermudagrass mite presence should be confirmed with careful examination of stems by peeling back leaf sheaths. State extension specialists or plant pest diagnostic laboratories can also confirm mite presence.

Replacing common and hybrid bermudagrass with C. transvaalensis and other warm-season grass species, where possible, is a potential management option for severely infested golf courses. Newly introduced bermudagrass cultivars should be evaluated for their susceptibility to the bermudagrass mite.

Biological control
The natural enemies of bermudagrass mite are largely unknown. Several species of predatory mites and pathogenic fungi have been reported, but these species are for eriophyid mites in general, and none has been commercially produced and sold.

Cultural and mechanical control
The observations that bermudagrass mite damage is often associated with moisture stress suggest that irrigation management may be a pest management tool. Reducing nitrogen fertilization is also suggested as a management option. Several golf courses in the Carolinas reported lower incidence of bermudagrass mite damage as grass emerged from a winter of extreme cold in 2018. These reports and management suggestions are, however, largely anecdotal. No study has been conducted to identify the irrigation regime, nitrogen fertilization rate and thermal tolerance range that would be most conducive to reducing infestation while maintaining optimal turf growth and quality.

Scalping and frequent close mowing are suggested as methods of removing infested terminals. A study published by the University of Florida Extension (1) has suggested that bermudagrass mite damage was reduced by 50% 28 days after the damaged turf was scalped in late spring. However, damage was increased by 500% 36 days after the turf was scalped in early spring. The results suggest that the effectiveness of scalping as a management method is dependent on season, but because no unscalped check was included, we could not confidently verify that the changes in mite damage were due to the scalping treatment or seasonal differences in mite activity.

Our observations corroborated Johnson’s observations that bermudagrass mites can be spread by clippings (5). The mites leave the drying clippings and move to nearby turf. Therefore, clippings from scalping operations should be collected and discarded, and mowing equipment used on infested turf should be cleaned and washed at designated areas far from the desirable turf.

Research on chemical control
Research to identify effective pesticides began as soon as the bermudagrass mite was found in the United States (10). The senior author also conducted similar evaluations in 2009-2010 (2).

Several insecticides were found to be highly or moderately effective, but some of these chemicals are no longer available or their use is severely restricted on golf course turf. For example, diazinon and dicofol are no longer available to the turf industry in the United States, and certain chlorpyrifos products (such as Dursban Pro, Dow) are not registered for use on golf course turf.

Figure 4. Bermudagrass mite damage is often most severe on slopes and bunker faces, likely because the greater moisture stress in these areas exacerbates the damage. Photo by JC Chong

With the hope of identifying insecticides that could be used to replace unavailable or restricted — but effective — insecticides, the senior author conducted a series of experiments in 2009-2010 to evaluate the efficacy of 26 insecticides and miticides for bermudagrass mite control (2). Abamectin stood out as one of the most promising products. Further testing of the efficacy of abamectin in several golf courses in South Carolina has supported the registration of Divanem (8% abamectin) for bermudagrass mite management.

Divanem is currently the only product that showed consistent improvement in the quality of mite-infested golf course turf in my studies. Similarly, Divanem was more effective than Triple Crown (a pre-mix product containing zeta-cypermethrin, bifenthrin and imidacloprid; FMC) and a control using water in a trial conducted in Florida (1). The same researchers (1) also found no difference in mite damage in scalped and unscalped turf treated with Divanem.

The senior author conducted a series of experiments in 2014-2016 (sponsored by Syngenta) to determine the best application timing of Divanem. The hypothesis was that four biweekly applications initiated in April (soon after green-up) would reduce the bermudagrass mite population early in its population growth and would thus be more effective in reducing the number of witches’ brooms than applications initiated in June (when damage has already occurred).

Miticides used for bermudagrass mite control should be applied as sprays repeated every two weeks. The senior author included a surfactant, Dyne-Amic (methyl esters of C16-C18 fatty acids, polyalkyleneoxide-modified polydimethylsiloxane, and alkylphenol ethoxylate, Helena), in all of his studies. We suggest that a surfactant be included in all spray solutions to improve penetration through the gaps between stems and leaf sheaths, where the mites feed.