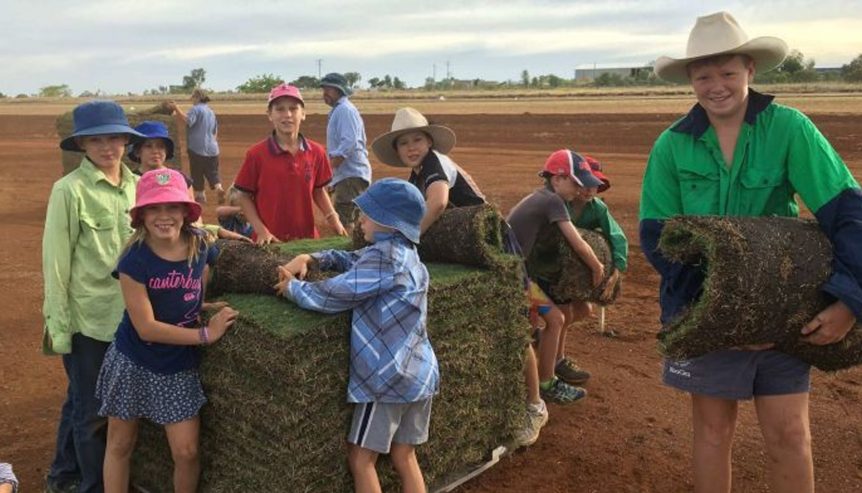 The residents of a tiny town in central Queensland say local sports clubs will struggle to survive if the council starts charging them for work they have already been doing for free.

Currently clubs and the school in Rolleston, which has a population of about 300, can head down to the town’s oval, flick on the lights and use the field, pretty much whenever they want, for free.

Central Highlands Regional Council covers the cost of power, water, and waste removal, while individual clubs take care of the mowing and cleaning up of the grounds — but that could be about to change.

“We have had meetings with [the council and] we have been told that all of the costs on this facility, the club will need to pay for,” said Rolleston Cricket Club member Cameron Gibson.

“That is a real concern within us and within the community, because it takes a lot of money to maintain this facility.

“Being such a small rural area, we believe that it’s going to be very draining on the whole community and the clubs will fold because they will not have the resources to maintain the oval at its current stance.”

Mr Gibson has played sport on the oval for the past 27 years and now his own children are doing the same.

“For a small community here in Rolleston, [with] approximately 68 kids in the school, sport is everything for them,” he said.

“People have put a lot of hours and a lot of energy — blood, sweat and tears, you could say — into [the facility] and you could lose the whole thing.

“That’s the hard part — not knowing what’s going to be there for our kids, the kids of the future.”

Photo: Volunteers have put hours of their time into the Rolleston oval over many years. (ABC Capricornia: Erin Semmler)

The local council is set to implement an initiative designed to progress sport in the Central Highlands region known as ‘Game Plan’.

The plan, which council wants to have finalised by December, would see the clubs and school paying to use the grounds, with the fee then used by council to pay for cleaning and mowing.

Photo: Most of the 68 kids at the local school have grown up playing sport at the Rolleston Community Oval. (ABC Capricornia: Erin Semmler)

“Since then, we’ve gone about communicating with our community members in all our regions,” he said.

“From there we started to roll-out a licensing agreement, which replaces the lease agreement.”

“We helped turf the original bit, we’ve done our duties in the canteen, on the oval playing sports, just helping out wherever we can,” he said.

“[The oval is] part of the community fabric — it’s built by community, it’s played on by community and the entertainment here, the crowds that come up … it’s really supported by community.”

His wife, Sophie Burrows, said the field was a central meeting point for the community.

“The oval is incredible and it’s a real asset to the community, just to keep people active and socialising,” she said.

“Coming together in a rural community with things like drought and other challenges, it’s really important to a community to have a space to come together.”