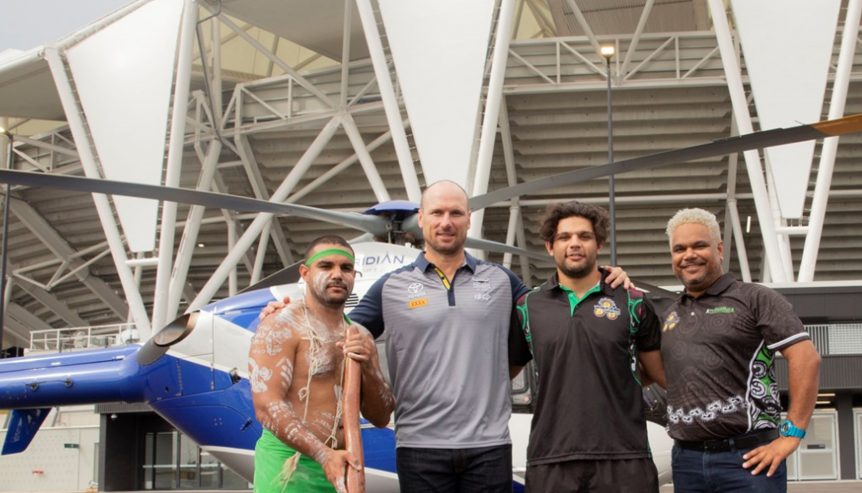 A special helicopter mission transferred a slice of natural history from the birthplace of the North Queensland Cowboys to their new home today.

Turf was transferred from 1300SMILES Stadium to Queensland Country Bank Stadium as a symbolic transfer of 25 seasons of history to the Cowboys’ new home ground.

The sacred sod was carefully removed from 1300SMILES Stadium, navigated the Townsville skyline before being lowered down at Queensland Country Bank Stadium – signifying the start of the laying of the stadium playing surface turf.

Minister for Sport Mick de Brenni said the first piece of turf being laid was another significant milestone for the construction of North Queensland’s new stadium.

“This symbolic transfer will mark the commencement of laying the playing field turf.

“Over the next few weeks, the speakers and sound system will be commissioned and tested, and the electronic scoreboard will spring to life in testing.

Member for Townsville Scott Stewart said there were now only five weeks to go before the free community open day on 22 February.

“I’ve already got my tickets and already almost 10,000 north Queenslanders have registered for free tickets. It’s clear this event is going to be a massive community celebration,” Mr Stewart said.

Townsville Mayor Jenny Hill said the open day was a great opportunity for the local community to view their new stadium.

“I look forward to seeing thousands of passionate north Queenslanders at the open day, it’s a great opportunity for the local community to have a sneak-peak of their new stadium,” Cr Hill said.

North Queensland Cowboys CEO Jeff Reibel said that the move is a meaningful one for the club.

“It’s great to be able to carry our club’s memories, lessons and dreams from the past with us into our new home, where we invite North Queenslanders to join us for an exciting future.

“Today is very symbolic for our club. Our foundation players helped lay the turf in 1995 and since that time generations of Cowboys have shed blood, sweat, and tears on that sacred sod in front of our ever-faithful members and fans.

He was the last foundation player to retire, after being the first to play 200 games for the club.

“I can remember the first season in ’95, when the whole community pulled together to deliver the stadium on time and then turned out in force to cheer us on,” Bowman said.

“There are plenty of memories here and bringing this turf with us is definitely a good way to start the season at the new stadium.”

The removal and transfer of the turf was done with the permission of, and overseen by, representatives of the Wulgurukaba First Nations People, the traditional custodians of the land on which both stadiums reside.

The stadium forms part of the Townsville City Deal signed in December 2016.