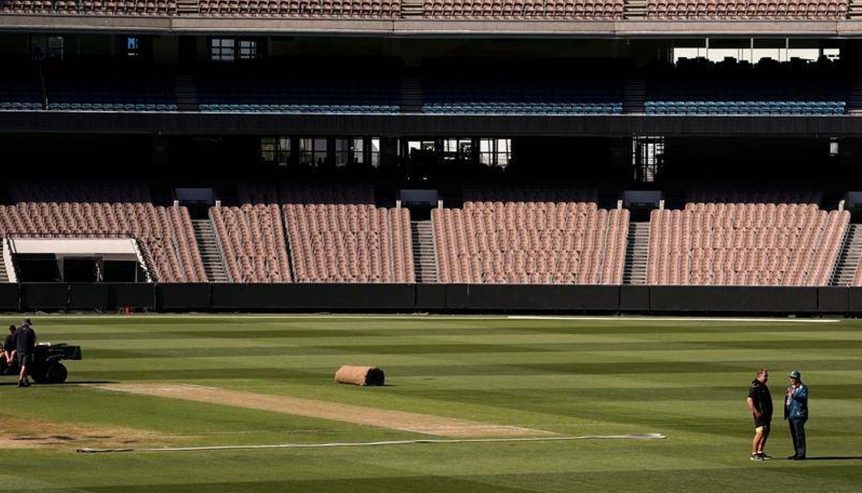 Cricket Australia is pleased with the progress being made on the maligned MCG pitch ahead of the Boxing Day Test and confident the MCC will deliver a suitable playing surface.

Preparation began over the weekend on a separate strip to the one deemed too dangerous to play on in a Sheffield Shield match that was abandoned earlier this month.

Too much moisture in that wicket led to divots hardened by the baking sun, raising fears over the safety of batsmen as good-length balls rose sharply and unpredictably.

“We’re really keen to ensure that the MCC doesn’t overreact to the situation in the last Shield game,” Roberts said on Wednesday.

“The great news was that no players were injured in that situation and we learnt a lot from it.

“They’re not overreacting and Matt Page is a master of his craft.

“We’re looking forward to him expressing that with his team in the Boxing Day pitch.

“We’re really confident that there won’t be an overreaction and that we’ll see a better balance between bat and ball at the MCG.”

Page, the former WACA curator, was headhunted by the MCC two years ago to fix a flat deck that has offered little for bowlers in recent summers.

An internal directive from the MCC to push the boundaries with pitch preparation and bring life to the wicket, led to this month’s Shield debacle.

“The condition of pitches at the MCG has been on a significant increase over the last period of time since Matt and the team took the concrete base out from underneath the pitches and replaced it with sand,” Roberts said.

“It sounds like a proper turf wicket now, rather than something that’s more like a concrete deck, so we’re really optimistic about Boxing Day.”