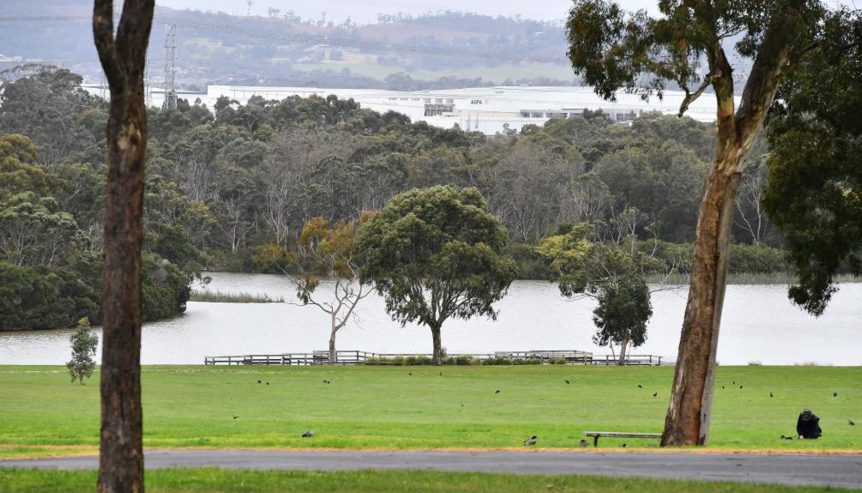 A series of large, fast-moving fires burning at a popular park in Melbourne’s southeast are being treated as suspicious.

MFB and CFA firefighters are currently working to douse a number of fast-spreading grass and scrub fires that broke out around a lake at Jells Park, Wheelers Hill early shortly after midday.

The fires are being treated as suspicious by emergency crews.

A bearded man on a pushbike is being hunted by police in relation to the fires.

He is perceived to be Middle Eastern, aged in his mid 20s with tattoos on his left arm.

He was wearing a black t-shirt, black pants and cream sneakers.

Police believe he may have been on a push bike.

Police have evacuated the park as 35 firefighters work to control the flames.

The largest fire is approximately 500m x 500m in size.

The fires are moving toward the Dandenong Valley Parklands.

“There are currently a number of small fires around the lake as well larger fires in the southeast and northwest corners of the lake area,” an MFB spokesman said.

“These fires are yet to be contained.”
Water from the lake is being used in the firefighting effort.

A Watch and Act message is in place for Jells Park, Glen Waverley, Scoresby, Wantirna South and Wheelers Hill.

“If you live directly next to grassland, quickly move two or more streets away from the fire,” the warning read.

“Grassfires can start and spread quickly and are extremely dangerous.

“Grassfires can generate extreme heat. Heat will kill you before the flames reach you.”