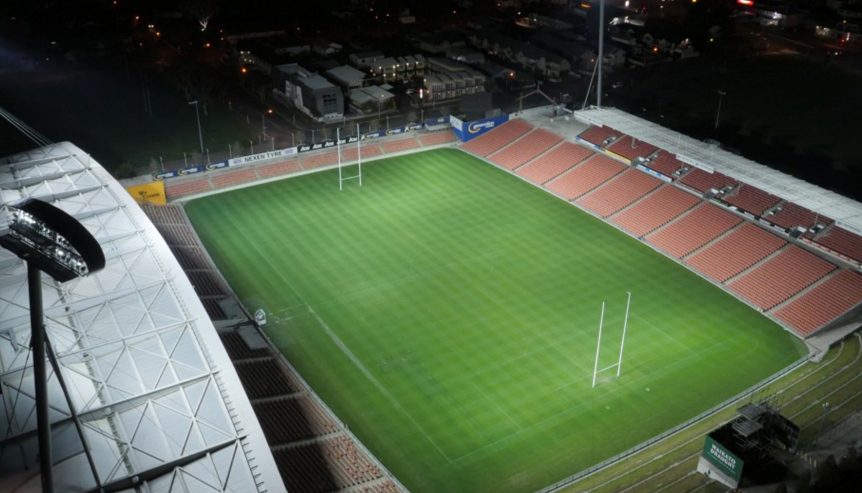 Work to replace the playing surface at Hamilton’s FMG Stadium Waikato is underway.

The stadium, which hosts Gallagher Chiefs matches, All Black Tests and in the past has hosted international rugby league and FIFA age group world cups, is managed by the H3 division of Hamilton City Council, and the turf replacement project is funded through the Council’s 10-Year Plan.

Replacement of the turf and related technology is vital to ensuring the stadium can continue to secure and host the world-class events it has become renowned for, and to meet the expectations of clients and athletes, says Karl Johnson, Turf Manager for FMG Stadium Waikato and Seddon Park.

“This project has been planned for several years – like all assets, turf and the associated drainage and irrigation technology do wear out, and need to be replaced,” he says.

The Tonga Invitational XIII vs Great Britain Rugby League Lions match held on Saturday 26 October was the final fixture on the venue’s previous turf, with the HSBC NZ Sevens 2020 the first event to be held on the new surface.

“November and December represent the window of opportunity for us to undertake what is quite a significant project for our venue,” Mr Johnson says.

Mr Johnson says the project begins with the complete removal of the existing turf, drainage and irrigation, before work commences on installation of the replacement kit.

Mr Johnson says the Desso product is essentially sewn into the sand using a special machine shipped in from Europe. Once the sewing of the turf is completed, there’ll be an extended grow-in period for the new grass to flourish.

Moisture meters in the new turf will enable improved monitoring of the turf moisture levels and give staff greater insight into the surface’s irrigation needs.

The turf replacement project also includes several environmental sustainability aspects – the construction of an artificial road around the periphery of the playing area, allowing for easier set-up and pack-down for digital signage and broadcast technology required for televised events, and a reduced use of fertiliser and water. Some parts of the old Motz artificial turf fibres will be reused in construction of the road, while soil removed from the stadium will also be reused at Claudelands Events Centre to create a bund. Local suppliers are being used for seed, sand and metal.

The FMG Stadium Waikato Facebook page will carry updates on the project and a short video will be produced to capture the work involved.

“This project is a new chapter in the venue’s history and it’s exciting for the Turf Team to be a part of it,” Mr Johnson says.

“We have built a reputation as producing world-class playing surfaces and this will enhance that.”