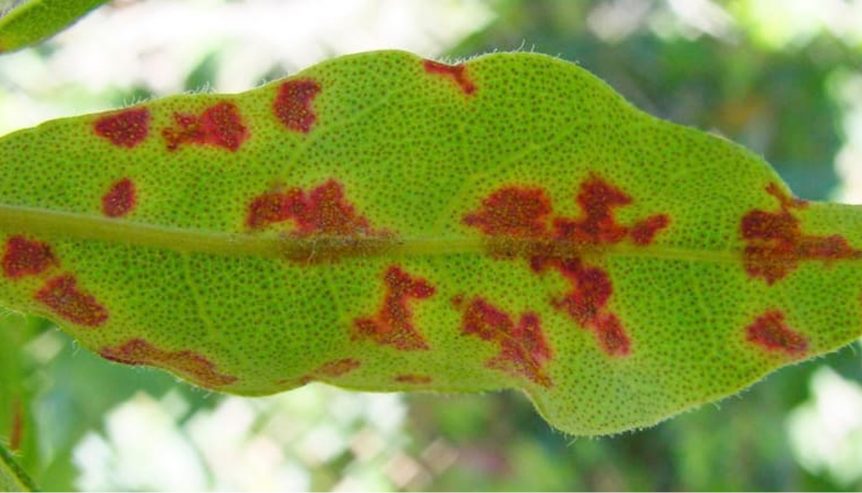 Bushwalkers and other travellers heading to Victoria and Tasmania over the summer are advised to take care to avoid spreading a fungus that has already placed dozens of native plant species at “immediate risk“.

So far, the two states have only identified the imported myrtle rust in nurseries but its rapid spread along Australia’s east coast in just a few years underscores the challenges facing biosecurity staff in all states to contain the fungus.

The devastating rust has been blamed for killing about 57 per cent of adult native guava trees, a common shrub along the east coast in just a few years.

Some 380 species among the Myrtaceae​ family of plants, ranging from eucalypts to paperbarks, are considered susceptible to the rust.

“It’s very unusual among rust fungi in that it’s got an extremely wide host range,” said Bob Makinson​, a conservation botanist and vice president of the Australian Network for Plant Conservation, adding most rusts only threaten a couple of species.

“There are about 50 species of immediate concern” in Australia, said Dr Makinson, ahead of a two-day workshop on myrtle rust control attended by government agencies and scientists that began on Tuesday in Canberra.

Along with wild species at risk, the emerging lemon myrtle and aniseed myrtle plantation industries are threatened, as are many plant nurseries, prompting the involvement of state agriculture bodies. Rapid spread
The fungus does best in moist forests and woodlands and has spread widely since its first detection at Wyong, near Gosford in NSW, in 2010.

It is not yet clear how it will fare in the biodiversity-rich south-west of Western Australia. With a few exceptions, such as the Clarence River catchment of northern NSW, the rust has mostly been confined so far to about 40 kilometres of the coast.

The rust attacks new growth, such as leaves, preventing flowering. Seedlings are also particularly vulnerable, creating the potential for a rapid spiral decline of susceptible species.

The fungus is spread by microscopic airborne spores that can also accumulate on hats, tents and other gear used by travellers, such as bushwalkers. Its entry into Australia is unknown.