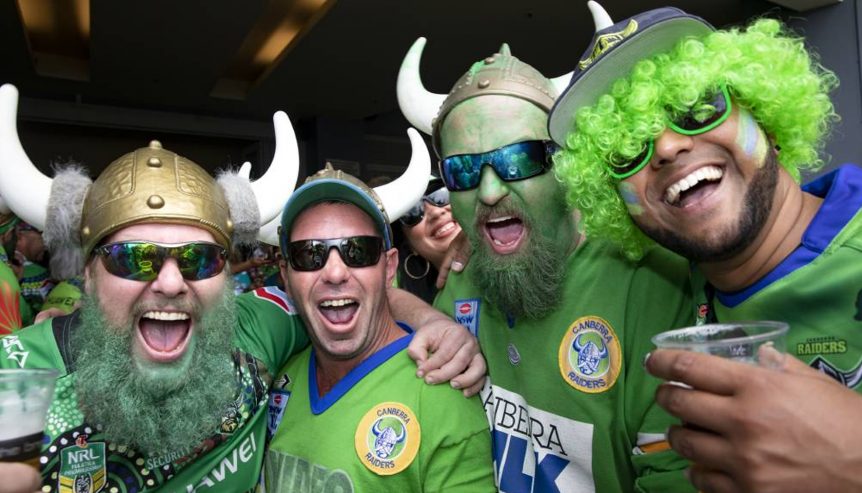 The ACT government will use the Canberra Raiders and ACT Brumbies as “pilot” programs to test the safety large gatherings after granting both clubs approval to have crowds at home games next month.

The Raiders and Brumbies will share Canberra Stadium on back to back nights with up to 2000 fans expected to attend both games on July 3 and 4.

It will be the first time crowds of more than 100 can gather in the same place since mid-March, with the Raiders cleared by the NRL to return home and the Brumbies to start a new domestic competition.

If the crowd comeback is a success, ACT Chief Minister Andrew Barr has flagged further easing of large-gathering restrictions for games at the end of July and in August.

The hope is the attendance numbers will soon be at the 6000 mark, about 25 per cent of the Canberra Stadium capacity, and even higher if there is no evidence of coronavirus infection.

Some details are still being finalised, with coaches to move to different areas and the entire western side to be made a “clean zone” for players. The Brumbies will open a member ballot next week for their first home game against the Melbourne Rebels on July 4. A mix of fans and corporate backers will attend and fill the 1500 allocated spots.

The Raiders are expected to detail their plan next week after evaluating restrictions.

“We’re looking forward to getting fans back in for the first game … hopefully over the coming weeks and months we will be able to increase that number as protocols and guidelines are changed,” said Brumbies boss Phil Thomson.

“There’s a lot of work to be done over the next week about exact numbers and finalising some protocols. Our members have been very supportive during this time. We’ve tried to stay connected with them and they’ve been positive through these difficult times. Now we can get games back on, it’s a good reward and thank you for the people who have stuck by us.”

The ACT government is in talks with the GWS Giants about bringing up to two AFL games to Manuka Oval this season, with a match fee payment to be scaled back in line with the amount of spectators allowed into the venue.

The bulk of members of both clubs have decided to stick by their teams rather than requesting refunds. The Raiders have given members options to donate this year’s fees, get vouchers for the Raiders’ shop or roll them over for 2021.