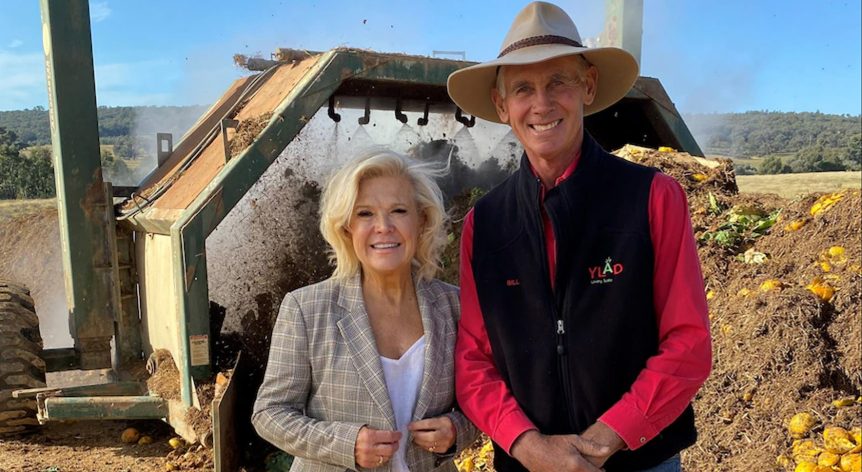 Farmers across the country are looking for alternatives to synthetic fertiliser as prices continue to soar.

But some farmers have left chemical fertilisers behind, pursuing more sustainable methods, both economically and ecologically.

Rhonda Daly and her husband Bill have built compost company YLad Living Soils near Young in the south-west slopes of New South Wales. The investment in compost has significantly reduced her reliance on chemical inputs over the past 20 years.

A growing number of farmers have moved away from industrialised agriculture, instead treating soil as part of a living system they manage.

“We have burned out the organic matter … through [industrial] farming methods,” Ms Daly said. Modern methods of agriculture have depleted soils all over the world.(Supplied)

“We’ve depleted the microbial diversity in our soils, so the soil goes from a fluffy chocolate cake to a terracotta tile and when you’re dealing with terracotta tiles, that’s when you have to have more inputs, because nature’s not really working.”

The Dalys have been using humus compost, which they make and sell on-farm using local organic waste.

“Humus is the final product of the composting process where the organic matter that has been broken down and then it’s microbially built-up into long molecular chains, which is active carbon,” Ms Daly said.

Merino sheep farmer Gordon Nash turned to biosolids about 15 years ago on his property outside Bathurst.

Biosolids are the by-product of sewage treatment plants and have been supplied to a small number of farms for the past two decades.

“[With] soils out here quite shallow and poor, it’s been chalk and cheese [with] what you can do with synthetic versus organic fertiliser,” Mr Nash said.

Mr Nash’s neighbour, John Toole started using biosolids after seeing how productive his pastures were. He saw his productivity increase by 50 per cent.

“There is no comparison whatsoever, bang for buck. Certainly the biosolids are more expensive first up, but the results are unbelievable,” Mr Toole said.

Justin Borevitz, an expert in soil sciences at the Australian National University, said there doesn’t need to be a “war on chemicals” to keep soil healthy.

Chemical fertilisers are still needed when crops are not getting enough nitrogen or other nutrients.

“The advantage of biologicals is that it breaks down slowly in the soil. And so it releases that nitrogen over time, especially as the plants get bigger,” Dr Borevitz said.

But not all organic fertilisers are created equal. “Biosolids are part of the solution when used right, because in the worst case it just burps out methane or nitrous oxide and bad compost can be really bad for the environment too,” Dr Borevitz said.

Piggeries and feedlots are examples of bad compost as they release as much methane as the animals do.

Another downside is that biosolids have to be chemically processed at a plant and then carefully spread, while compost is not readily available in large quantities for commercial farming.

But Dr Borevitz said farmers could invest in industrial equipment: a biochar machine, a rock-crushing machine, or a compost churner.

A composting set-up like that could remineralise soil, increase soil carbon and keep the system healthy enough to sustain more crops long-term.

“But, none of these are a silver bullet by any means,” Dr Borevitz said.