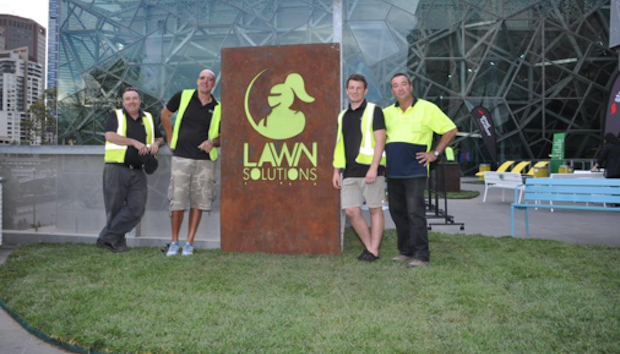 Titled ‘This Public Life Festival’ and held at Melbourne and surrounds, the conference-proper was staged on Friday and Saturday at the Iconic Federation Square building in the centre of the City with fringe events scattered also around town over the week.

Over and above its sponsorship arrangement with AILA, Lawn Solutions Australia participated in a number of events over the week that helped showcase turf and its importance in the urban environment.

A keenly sought-after event the ‘Greener Environments Turf Tour’ was held on the Thursday and included a bus trip and tour of the Melbourne Botanical Gardens at Cranbourne, then an inspection of Lawn Solutions Australia member Anco Turf’s new farm and facilities nearby.

Over 20 Landscape Architects braved the hot and blustery conditions to see a turf farm in operation, as well as a number of displays also provided by some key industry partners.

Turfgrowing, the different varieties, harvesting; even turf installation were demonstrated to the visitors, most of whom had never previously seen turf in production.

Host Ryan Cotter of Anco spoke on the first part of the tour and gave some insight into their relatively new operation.

Ryan explained how their choice of location was partly dependent on the soil type – the high sand-content soils of the Cranbourne farm being attractive to many in the commercial and sportsturf sectors to offer savings in negating the need to wash turf in most instances – their sand profile more than sufficient in meeting most free-draining, soil requirement specifications.

Mr Cotter also explained the differing turf varieties and the processes involved from the initial planting through to harvesting and delivery.

Industry partner Gavan Hegan of Nuturf addressed the audience of the importance of soil structure in turf design and maintenance and Stan Wells of Equipment Solutions demonstrated the need for relieving soil compaction, including an ‘Agrivator’ aeration demonstration on a newly-harvested turf surface.

Anco’s Manager Bruce Stephens also gave a practical demonstration on ground preparation and turf installation and establishment that garnered many questions from the participants.

Anco turned on a terrific presentation that was nearly surpassed by the luncheon they put on that was also thoroughly enjoyed by their guests.

And judging by the positive comments that came back following the event, further turf tours may be also planned in the future for other centres; with these designers hungry for knowledge in the main, when it comes to turf.

AILA Victoria Chapter Manager Felicity McGahan spoke highly of the trip on the visitors’ return to the city and those who enjoyed the tour. “Literally everyone couldn’t speak highly enough of the experience,” said Ms McGahan. “Thanks to Lawn Solutions and the terrific team at Anco Turf who went over and beyond with their hospitality and their demonstrations.”

“I can see this becoming a much sought-after event in times to come,” she went on to say.

Back at Federation Square in the centre of Melbourne, turf was again to be given centre-stage; this time with a number of static turf displays installed in the early hours of the Thursday morning.

The turf from Lawn Solutions northern Victoria member Strathayr was in terrific condition and changed the entire look and atmosphere of the outdoor paved areas.

Ensuring turf wouldn’t be missed by the event’s participants a welcoming Green Carpet was also installed at the entrance to the venue and stood up well, even after the rigour of thousands of feet over the two-day event.

The Lawn Solutions Australia on-site team were inundated with comments on how much of a transformation had been made to the outdoor area, with many requests by those close to the venue to leave it there or make it a more permanent fixture.

That, in essence was what the majority of the festival represented in the main said Lawn Solutions Australia Business Manager Simon Adermann.

“Much of the content of the presenters and quite a great deal of the conference focused on better delivering Green Open Space outcomes,” said Adermann.

“It was really heartening to see from our perspective,” he said. “Turf had often been seen in a negative light over much of the last decade as an environmental vandal or a water guzzler, but now we’re seeing the health, erosion, filtration, cooling, carbon sesquestration and many other environmental benefits of turf being realised in landscape design and very much a part of many of the speakers’ presentations, “ he explained.

Turf was even featured heavily in many of the categories at the AILA Victoria Awards Ceremony held at the Melbourne Town Hall on the Thursday night.

Lawn Solutions was again a sponsor here and a number of LSA’s Victorian Turfgrowers and Lawn Solutions Ambassador, Landscaping Personality Jason Hodges, joined in the event with some 200 guests for what was an entertaining and inspirational night.

Speaking after the event Mr Adermann also described the importance of the relationship that he says has quickly developed with AILA. “We were warmly welcomed by all the AILA staff and they did a fantastic job with the event.”

“Our Lawn Solutions staff and our Victorian growers, Anco Turf, Strathayr, Coolabah Turf and Lillydale Instant Lawns all played a huge part in helping out as well to make the event a monumental success,” he went on to say.