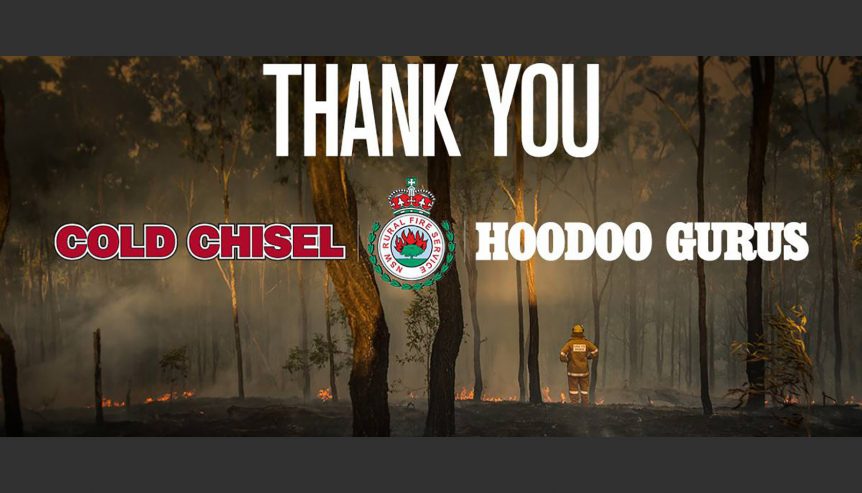 Legendary Aussie rock bands Cold Chisel and Hoodoo Gurus will play to a full house at the first ever concert at Bankwest Stadium, with the crowd including thousands of Rural Fire Service volunteers and their families who will be honoured guests at the venue.

Minister for Sport and Member for Parramatta the Hon. Dr Geoff Lee MP, announced today that Venues NSW, which owns the Stadium on behalf of the NSW Government, has donated more than 2500 tickets to volunteers as a “thank you” for their extraordinary service and sacrifice during the current bushfire crisis.

As part of their first ever outdoor summer tour, Cold Chisel will be joined at Bankwest Stadium on Friday 24 January by Hoodoo Gurus, Birds of Tokyo and Busby Marou.

“We’ve been really moved by the sacrifices that these courageous volunteers have made in this desperate time,” says Jimmy Barnes. “We’re excited to have them join us on this great night of rock & roll – and to raise our voices and say ‘thank you’.”

Hoodoo Gurus have never shared a bill with Cold Chisel, so this show provides the RFS volunteers and fans in general with a unique opportunity to witness two of Australia’s most-loved bands performing some of their greatest hits live.

“The ongoing bushfire emergency has made this a very hard, grim summer for so many Australians, and especially the RFS volunteers,” said Hoodoo Gurus singer/guitarist Dave Faulkner.

“They have endured unbelievable conditions defending communities and the price they have paid is beyond reckoning. We only hope that, for a few hours on Friday January 24, the healing power of music will give some of them a brief respite from the trauma they have experienced. In our own small way, we’d like to honour them for the sacrifices they have made on all our behalf.”

NSW Rural Fire Service Commissioner Shane Fitzsimmons said: “It’s been a devastating and tragic fire season and NSW RFS members have been working tirelessly for months to protect the community. Despite this adversity, there’s been incredible generosity shown by the Australian people.

“We’re grateful to Venues NSW and the NSW Government for offering our members tickets to the Cold Chisel concert, so they can take time out to enjoy a memorable experience with these Aussie rock legends.”

Fans attending the concert will be able to donate directly to the NSW Rural Fire Service and the official tour charity Foodbank, which has been providing relief for fire-affected communities. Cold Chisel has already pledged a six-figure sum to fire services and other support networks

Cold Chisel have been playing to rave reviews around the nation since the tour started on New Year’s Eve.  Their album Blood Moon debuted at #1 on the ARIA Chart in December and the band’s album All For You – The Best of Cold Chisel has just been announced as the second highest selling Australian album of the past decade.