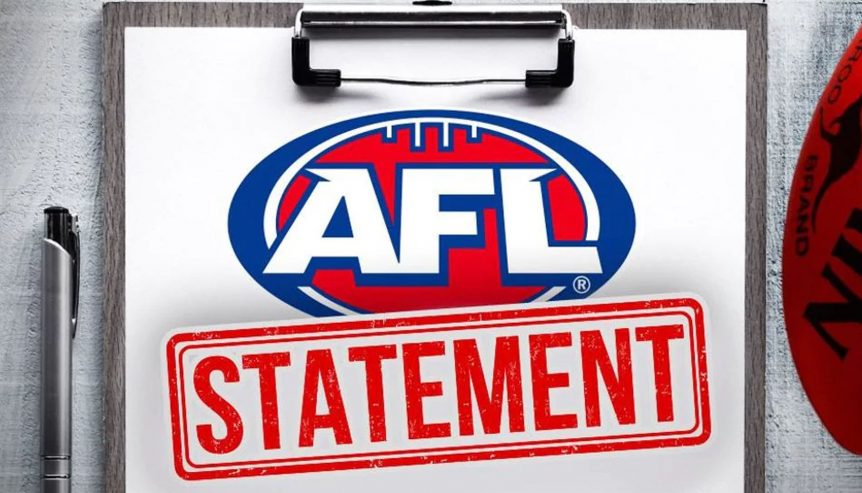 The AFL has today announced that clubs will return to training on Monday, May 18 and the 2020 Toyota AFL Premiership season will resume on Thursday, June 11.

Players and football department officials will return to clubs on Monday, with clubs completing a 3.5 week training block before matches officially restart.

Clubs will initially train in maximum groups of eight, before resuming full contact training from Monday, May 25.

All players and returning football department staff will have been tested for Covid-19 prior to returning to the club and undergone education sessions on the protocols they will need to follow, including rigorous ongoing screening and regular testing, throughout both the training and return to play period. This will also apply for umpires and AFL Match day staff once the season resumes.

Strict protocols will be in place to protect players, officials, staff and the wider public with all involved in the game regularly tested ahead of any contact sessions or matches.

“Today is a significant step in getting footy back for everyone – our fans, our clubs, players, coaches, umpires, officials and staff, our broadcast and corporate partners and club partners and all who love the game,” AFL Chief Executive Officer Gillon McLachlan said.

“We know as this situation continues to evolve, we have to remain agile and flexible to be able to adapt where necessary while ensuring we continue to prioritise the health and welfare of our players, staff and the wider community and – importantly – don’t place any burden on the public health system.

“We have developed our model as the best option for returning to play for both players and officials and the general public and have done so following extensive consultation, including with the Federal, State and Territory Governments and Chief Health Officers.

“I want to thank the Prime Minister, the various ministers, State Premiers and Chief Ministers and all the Chief Health Officers for their on-going support and guidance.

“I particularly want to acknowledge the Victorian, NSW and Queensland Governments for their support in leading the way for football to return.”

“All through this evolving pandemic we have anchored every decision in-line with the advice of the respective government and relevant medical authorities. Our return to play plans and our timings is evidence of that.

“Our industry understands the opportunity we have been given and we also fully understand and accept our responsibility to our football family and to the wider community.”

In order to maintain flexibility and given that some states still have restrictions in place, the AFL will release the remaining 144 games plus finals of 2020 Toyota AFL Premiership fixture in blocks of up to 4-6 weeks.

The first block of games will be released over the next 10 days with games in the early part of the season being scheduled at AFL venues in states that have approved full-contact training and matches.

The Return to Play model will see all teams based out of their home state with the exception of the Western Australian teams West Coast Eagles and Fremantle, and South Australian teams Adelaide Crows and Port Adelaide.

West Coast Eagles and Fremantle will complete the pre-season training block at their home bases before relocating interstate ahead of their first scheduled match while current restrictions in SA will mean that Adelaide Crows and Port Adelaide will need to relocate interstate before May 25 when full contact training will begin for all 18 clubs.

West Coast Eagles, Fremantle, Adelaide Crows and Port Adelaide will all relocate to the Gold Coast.

The move has been made possible with the support of Queensland Premier Annastacia Palaszczuk, Tourism Minister Kate Jones and the Queensland Government’s strong health response. The AFL also acknowledges the support of the Gold Coast City Council and Mayor Tom Tate.

All four clubs will be based interstate for an initial period of at least four weeks and the AFL will continue to remain flexible with fixturing so it can respond to any changes to restrictions in either state.

The four clubs will be housed in accommodation villages – West Coast Eagles and Fremantle at The Pines Resort and Adelaide Crows and Port Adelaide at the Mercure Resort.  Players will be able to host family members at any stage during their time away from home which will be funded by the AFL.

The AFL has agreed with the players it will continually review the arrangements in consultation with the AFLPA, clubs and the WA and SA Governments.

“We recognise the great collaboration and understanding with our WA and SA clubs and their support for ensuring we get a full national competition underway.  We know we are going to need to retain maximum flexibility with the fixture to allow for home games in each state should circumstances change.” Mr McLachlan said.

The AFL said the Return to Play model was the best possible response based on the different restrictions in each state and territory and the overwhelming priority to ensure the health and safety of everyone involved in football as well as the wider community, while seeking to minimise the impact on players, officials and their families.

The AFL hopes to play games in most states and territories but will continue to maintain an agile and flexible fixture to take account of any changes to restrictions in each respective jurisdiction.

“I am confident that how we start won’t necessarily be how we finish and that as the situation changes around the country we have the flexibility, agility and industry collaboration to change where we need to,” Mr McLachlan said.

All future decisions on location of matches will be made in consultation with Federal, State and Territory Governments and their respective Chief Health Officers.