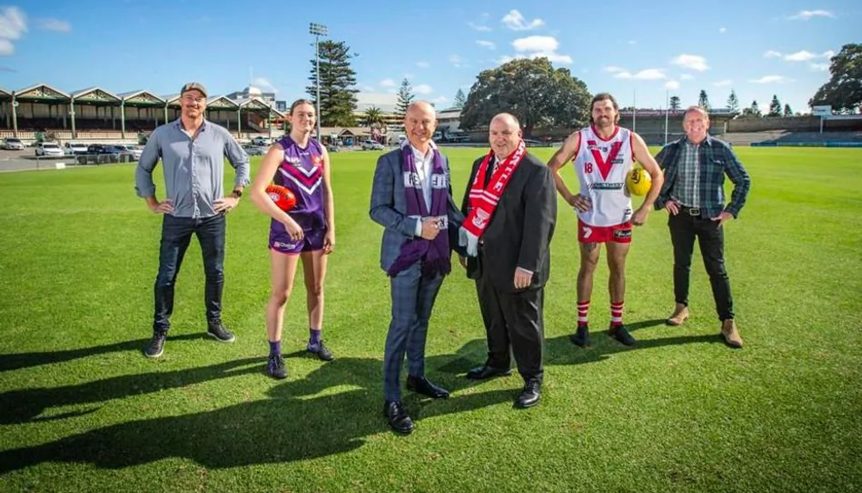 The City of Fremantle has unveiled its Masterplan for the redevelopment of historic Fremantle Oval.

It includes new clubrooms and grandstands, improved spectator facilities, lighting upgrades and the realignment of the playing field to reconnect the oval to the heritage-listed Victoria Pavilion.

Other improvements include new grass banks, undercover seating terraces, a new events space, nature play area and improved connections with the rest of the city.

Deputy Mayor Andrew Sullivan said the redevelopment of the oval was one of the City of Fremantle’s top priorities.

“Fremantle Oval has been the cherished home of local sport in Fremantle since 1894, and in recent years has also hosted AFLW matches and last year’s spectacularly successfully WAFL Grand Final,” Cr Sullivan said.

“But the reality is that the ground and its facilities for players, umpires, spectators and media no longer meet modern requirements, particularly for women’s sport.

“With our aim to make Fremantle Oval a place not just for football but an active community hub, the community amenities also need to be improved.

“The Masterplan recognises the heritage and strategic challenges of the site, including the neighbouring World Heritage listed Fremantle Prison, the proposed new Fremantle Police Headquarters on what is currently the Cappuccino Strip car park and the future planning needs of the Fremantle Hospital site.

“Another key aspect of the plan is improving pedestrian and general access to the oval, to help with connectivity, activation and safety and open up the oval as major new parklands and community facilities strategically located between the city centre and Fremantle Hospital.

“Once complete Fremantle Oval will set a new benchmark for state football facilities, and stand as an integrated part of city life for a range of events and activities that everyone can enjoy.”

“Currently only one of the eight WAFL venues meet the minimum standards for AFL category 4 facilities, leaving WA in a poor position when compared to other states, and around 70 per cent of football venues across WA don’t adequately cater for female participants,” Mr Britt said.

“Upgrading our clubrooms and the ground will deliver one of Perth’s best WAFL facilities which could cater for AFLW games, WAFL and WAFLW matches and AFL pre-season games, including day and night TV broadcasting.

“Everyone loved the atmosphere at the WAFL Grand Final at Fremantle Oval last year, and implementing this Masterplan will develop a destination that integrates with the historic city around it and deliver a great gameday experience for fans and the broader Fremantle community.

“This project is about more than just football. It’s about continuing Fremantle Oval’s legacy, and revitalising an important part of our city’s heart and soul.”

“Fremantle is our club’s spiritual home, and we welcome the prospect of enhancing the facilities for our players and fans,” Mr Alcock said.

“The development project will allow the club to have a presence in our heartland while enabling our AFL Women’s team to continue playing at the ground in front of the next generation of Fremantle fans.  It will also provide more opportunities for AFL men’s pre-season fixtures to be scheduled at the ground.

“We love the atmosphere at Fremantle Oval and we are excited to enhance the fan experience and ensure the standard of facilities meets the expanding requirements of the AFLW league as it continues to grow.”

Mr Alcock said while the Dockers remained committed to keeping their head office and administration/training facility at Cockburn, the development would allow the club to explore a more permanent presence at Fremantle Oval, including potential community, cultural and education facility opportunities.

A vibrant Freo Oval precinct would not only enhance the Dockers’ football programs, but also the community and fan initiatives of the club, he said.

The Fremantle Oval Redevelopment Masterplan will be considered by Fremantle Council’s Finance, Policy, Operations and Legislation Committee on Wednesday.

If adopted by the council, the project partners will seek financial assistance from the state and federal governments to contribute to the project.

The total cost of implementing the Fremantle Oval Redevelopment Masterplan is estimated at approximately $36.8 million, with four independent stages.

Optional items that are costed separately include an additional floor in the South Fremantle clubrooms for the Fremantle Football Club at $4.2 million, and an underground car park at $2.7 million.

The former headquarters of the Fremantle Football Club, which is currently being used by the City of Fremantle as a temporary administration centre, is identified as a future redevelopment site.