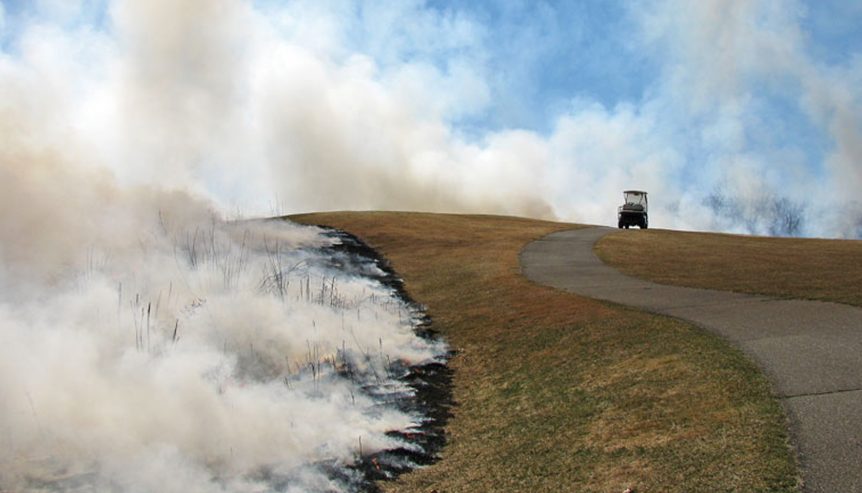 Twenty years ago, Leslie Park Golf Course in Ann Arbor, Mich., was typical of many public golf courses around the Midwest.

Grass was mowed at four different heights: greens, tees, fairways and rough. This meant that in areas where a mower could not go, such as around our ponds and creeks, the turf was maintained with a weed whip at a height of 2 to 3 inches all the way to the water’s edge.

There were areas where golfers did not often go, but they were maintained just like the rest of the rough — mowed once or twice a week. My predecessors might have been accused of laziness if an area were not mowed in a timely fashion.

Today, however, it is common for golf courses, including Leslie Park, to have large areas between holes that are “naturalized.” These pockets of long grass bring to mind the links courses of Scotland, where the game originated. Unfortunately, the term “naturalized” does not translate to “no maintenance.” On many golf courses, the maintenance of these areas consists of mowing the long grass down once a year in fall. If this is not done, woody shrubs and other undesirable plants can start to overrun the area.

At Leslie Park, we have incorporated controlled burning — a strategy that offers added benefits to the wildlife near the golf course — into our maintenance of these areas. In North America, native prairie and savanna plants are tolerant of occasional fire. By introducing this process into areas on the golf course that closely resemble these native ecosystems, we can stimulate native plant and animal populations and give them a competitive advantage over invasive, fire-sensitive species, such as buckthorn and honeysuckle.

We burn in spring, which kills the top growth of the woody plants that encroach into naturalized areas and eliminates accumulated leaves and dead plant material. Burning at this time — before the grass has begun to green up — also allows the charred, blackened soil surface to quickly absorb solar radiation and raises soil temperatures faster than surrounding turf areas.

In addition, the weeks after burning are also a nice time to use a selective herbicide to eliminate broadleaf weeds from these areas, as the tender, green shoots of the weeds are easy to identify against the darkened surface. It’s also a great time to sow some native grass seed. Native grasses usually have a bunch-type growth habit, like ryegrass, instead of forming a dense turf, like fescues. Although the long native grass may look impenetrable, the tops of the plants can be moved aside to see all the way to the soil. This allows golfers to find stray balls more easily.

Preparations for a controlled burn on a golf course

It is not advisable or safe to conduct a burn without some preparation. With the help of the city of Ann Arbor’s Natural Areas Preservation (NAP) unit, we have developed a burn plan for Leslie Park. This details what areas we would like to burn, what environmental conditions must be present, routes of access for emergency vehicles, supplemental water supplies (irrigation hoses, ponds, streams or hydrants), the location of the burn (both major intersections and GPS coordinates), and any nearby sensitive areas (schools, residences or roads). Our burn plan also includes phone numbers for emergency contacts (fire marshal, emergency dispatch, hospital, etc.), a map of the area that details each area to be burned, a contingency plan if the burn does not go as predicted, and requirements for containment of the site after the burn has been completed. In general, this mop-up plan states that the burn is not completed until it is made safe and there is no more smoke coming from the area. If something is smoking, that means there is still heat being generated and there is a risk of the fire starting up again.

Environmental conditions also factor heavily into our burn plan, as they affect how well a natural area will burn. The grass might not burn if it has started to green up, and even if you are able to get it lit, you will have a hard time keeping a fire going. If you are able to burn, it will create a lot more smoke, because the cooler fire will not fully combust the plant material. 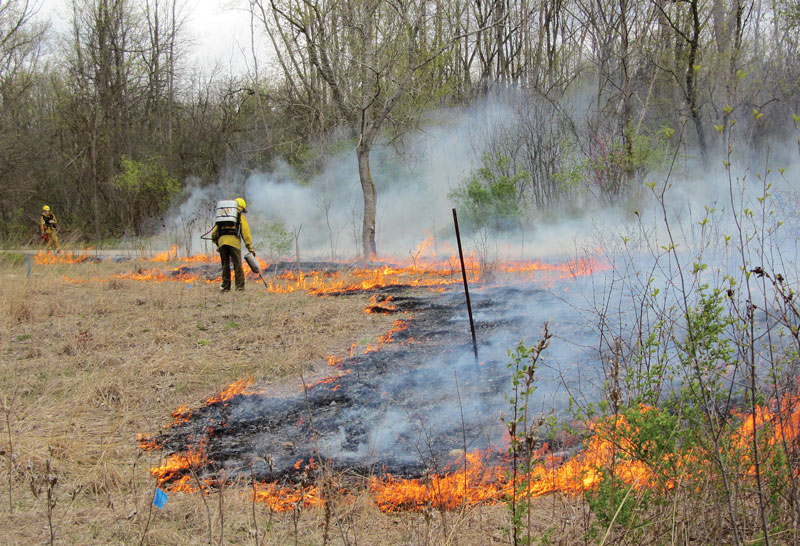 For a controlled burn, the relative humidity should be between 20 percent and 50 percent. The best burning days tend to start off cold and then have a temperature increase of 20 to 30 degrees by the afternoon. The skies should be clear and the winds should be light. We look for a day with wind speeds between 5 and 20 mph. While it may seem like a calm day would be best, a soft breeze from a predictable direction is actually safer, because you can predict where the fire line will go. Anything above 20 mph is an obvious risk. Another consideration is wind direction, as the smoke can be a nuisance downwind. If the smoke blows across a road, visibility of drivers can be impaired, and while some people may find the smell objectionable, it can cause a medical emergency for an asthmatic.

We always make sure that we have adequate burn breaks to ensure that the fire will not escape from the target area. These breaks completely surround the area and consist of strips of noncombustible material that are at least twice as wide as the likely height of the flame. In grassy, prairie areas, the flames are unlikely to get above 2 or 3 feet high, so a strip of at least 6 feet should suffice.

Bare soil is the best burn break and can be achieved in a forest area by using a leaf blower to remove leaves and other detritus from the forest floor. Luckily, turfgrass areas mowed at typical rough heights also meet this description and are thus effective burn breaks. If there are any trees or other structures within the burn unit that you do not want to be harmed, make sure to clear an area of several feet around them before beginning the burn.

Smoke rising over a golf course can be cause for alarm, so signs are a good idea, to let people know what’s happening. A well-placed sign stating that there is a controlled burn going on will eliminate many phone calls from concerned citizens. We place at least one sign in each direction of travel on nearby roads, as well as near any walking access close to the golf course property lines.

Although the customers at Leslie Park have grown accustomed to our spring burns, we make sure that on burn days, the clubhouse staff informs golfers of what is happening. In addition, early in spring, we send out postcards to all the neighbors in the area to let them know we will be conducting burns this year. Information on the objectives and the safety procedures we use as well as phone numbers to call if they have any questions are included on the postcards.

Because of the amount of burning done in the city of Ann Arbor, both at the golf courses and in other native park areas, we have a good relationship with the fire marshal and the fire department. Part of this relationship is letting them know well in advance any time we are thinking of burning. Permits from the fire department may also be needed, depending on the location of the burn.

Equipment for a controlled burn

To conduct a controlled burn, you need to assemble some equipment. The first thing that every member of the burn team should have is flame-resistant clothing made of Nomex or similar fabric. A fire helmet with a face shield and fabric hood will help protect the head from the radiant heat of the fire. We also use sturdy leather boots and leather gloves. Each team member should have a two-way radio to communicate with the other team members.

A drip torch is the most efficient way to begin the burn. It is a container for kerosene or other fuel with a burning wick attached to a short arm. Fuel is dripped through the wick, where it lights and falls onto the ground, igniting the area to be burned.

We also make sure to have multiple ways to extinguish the fire. A backpack sprayer is one of the most convenient ways to transport water to the site. There are specialized wildfire-suppression sprayers that use a brass hand pump to spray streams of water 20 to 30 feet. You should also have another source of water available, both to refill the backpacks and to use if these sprayers are not working.

Members of the Leslie Park burn crew meet before the start of a burn to review the burn plan and go over the day’s objectives.

Other options for putting out small fires are shovels, metal rakes or a “flapper,” which is a rubber mat attached to a long handle. The flapper is used to smother small fires where the ground cover is short. In some instances, even a boot can be used to put out a small fire. If you deprive the fire of oxygen, it will go out.

One thing that may or may not be considered equipment is a smoke observer. This vital member of our burn team drives to the nearest downwind homes or roadways and reports back to the burn boss on the smoke conditions off site. We rate the smoke on a scale of zero to five. A zero means that no trace of smoke can be seen or smelled, while a five means that there is a heavy cloud of smoke at ground level. If we get a report of a level-five smoke situation, we will put out the fire and reconsider our burn plan for the day.