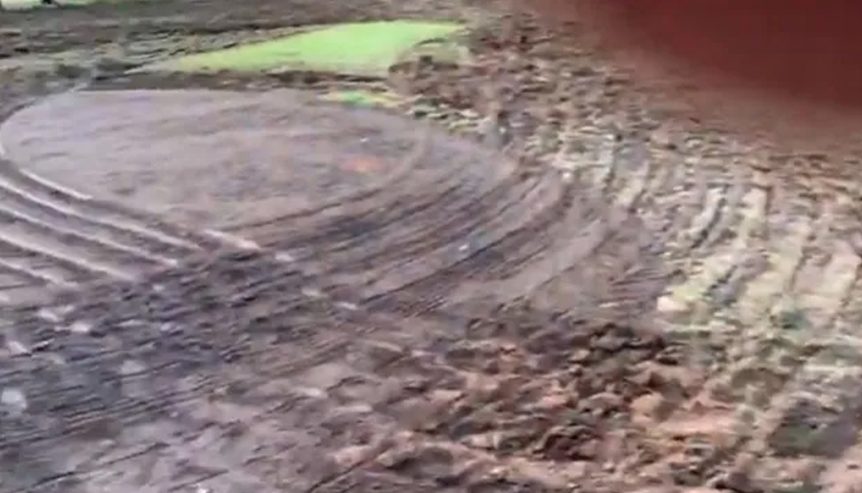 A man will appear in court next month after allegedly destroying a golf course with a tractor in the New South Wales small town of Dunedoo.

Footage shows the chaos caused at Dunedoo Golf Club in central NSW after a man allegedly drove a tractor carrying a disc plough through the majority of the nine-hole course on Tuesday night.

The tiny town of 800 people, located 340km west of Sydney, was devastated after members discovered four fairways and several greens on the nine-hole course completely torn up the next morning.

It prompted a police investigation which resulted in officers from Orana Mid-Western Police District arresting a 34-year-old man at a property on Ballinda Road, north of Dunedoo, on Wednesday.

A video uploaded by GOLF NSW – the sport’s governing body – shows the devastation after locals discovered the course on Wednesday morning.

“You’ll never see anything, for as long as you live, like what‘s happened to Dunedoo golf course,” the person filming is heard saying.

“We’ve had a vandal (allegedly) come in and plough four fairways on the golf course. I’ve never seen anything like it in my life.”

In the footage, the camera pans to a green which was completely ripped up.

Dunedoo GC’s greens are sand greens – which are made of oiled sand and other material. Sand greens are commonly found at small golf clubs in rural areas as they are easier and cheaper to maintain than traditional turf greens.

The club’s general manager Ricky Bush said the incident was a blow to the community with golf the only sport Dunedoo residents could participate in during COVID-19.

“The club is a community asset, a vital part of the town,” he told Golf NSW. “People were just staring at the mess and starting to cry. They couldn’t believe it.

“We were the only sport in town which had kept going through the pandemic.

“We were only talking at our Annual General Meeting the other night about what we had achieved last year even with the pandemic, and now we have copped this.”

Estimates of the damage mean the course will be out of action for at least four months, with the financial cost still to be determined.

The club posted a message on Facebook on Thursday.

“Thank you to those in support for our club after what has happened to our golf course. We would like to start on the course, but cannot do anything until authorities say otherwise. We will be back soon.”

Click here to donate to assist in the rebuild