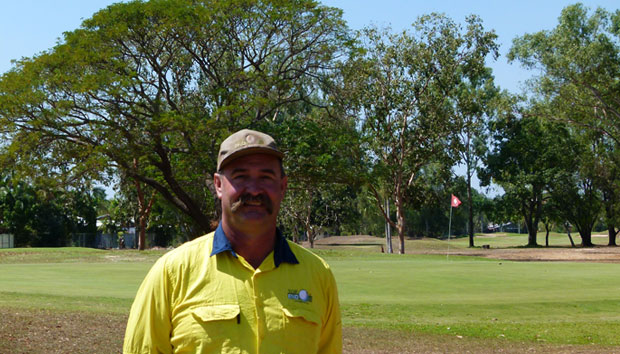 Darwin Golf Club is one of only three golf courses in Darwin.

Mark Anderson is one of the greenkeepers from Top End Greenkeeping, who look after the course under contract.

Mark explains that Darwin Golf Club’s course used to be run by another contracting company called Resorts who he previously worked for, alongside his current boss, Scott Trembath.

After working for Resorts at Darwin Golf Club for a couple of years, they lost the contract and Scott took it over with Top End Greenkeeping. They have now had the contract for the past four to five years.

“We have all new machinery, mainly Toro gear and it has been running pretty well ever since we started.

Mark says the biggest problem that he and the other seven staff have up in Darwin is water.

“We have access to a treatment plant and that sometimes breaks down a bit, so we can struggle to get water.

“And you can imagine in 35 degrees every day the place dries out pretty quickly and it can be hard to get it back together.

“And then in the wet season we have got hot, high humidity, we get a lot of diseases up here, mainly pythium, that’s our biggest problem.”

The greens at Darwin Golf Club are Tiff Dwarf and the fairways and tees are mainly Queensland Blue Couch, with some common couch.

Mark says that pythium can be a problem on the course because of the hot and humid conditions.

“We are always aerating, we put mini-tynes through our greens, always putting down wetting agents and chemical spraying mainly in the wet season.

“We also use preventative measures like with our fungicides, but it is different to down south because something is always growing.

“Before Scotty and I came up here they would lose whole greens regularly due to pythium.

“We have had a few spots here and there but we haven’t lost any. We put a preventative program in to stop that and we know the troublesome areas on the course and just hit them.”

“Where there is water, we constantly have to be mowing and you can see as you look around, where there is no water it is like a desert, it really dries out.

“It is a lot more unforgiving up here, you can’t get away with anything.”

Mark says the cost of living is very high in Darwin, which can pose a challenge particularly for apprentices whose wages are not very high.

Also, there are no turf management courses on offer in Darwin, students have to do block release in Brisbane or Adelaide. Periodically.

Another challenge that Mark and Scott face is the sheer distance between Darwin and other cities in Australia, in terms of getting new parts if machinery breaks down.

During the corporate season Marks says that they would be mowing the greens five to six times a week.

“Our greens are cut at about 3mm and then in the wet season we will raise them to about 5mm.

“Fairways are cut at 15mm and our tees are about 10mm. With the fairways, there are a few areas you just can’t keep wet, they just dry out.”

Darwin Golf Club has well over 1000 members and during the corporate days there will be 160-170 players, a lot of whom use golf carts due to the heat, which can be tough on the turf.

However, Mark says golf is just rapidly growing in Darwin and things are only getting bigger and better for the club.