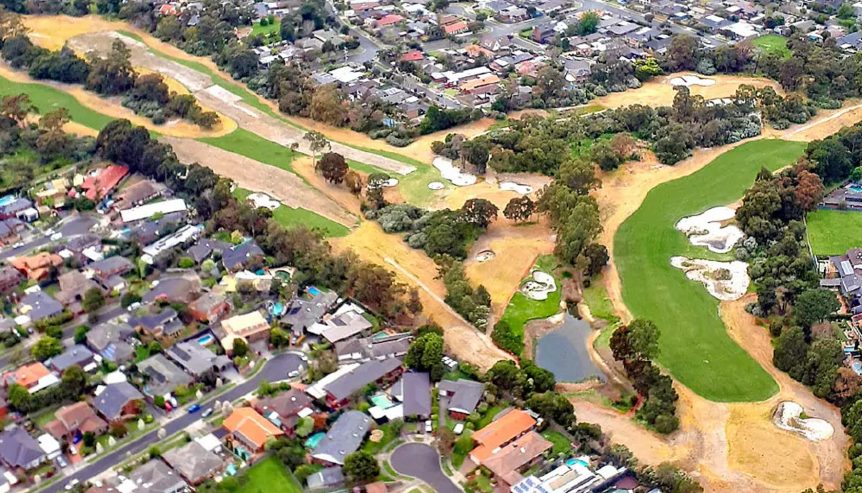 Most of the grass at a former golf course at the centre of a five-year bitter redevelopment battle has been chemically killed off.

Shocking aerial images have emerged of the former lush green lawn at Dingley Village’s Kingswood golf course, which is brown and burned after being covered in toxic herbicide spray.

The landowners, property fund giant ISPT, say it is part of “regular maintenance” but angry neighbours have slammed it as a “scorched earth” policy and an “environmental disaster”.

But in October last year, Kingston councillors voted unanimously against a rezoning of the land for residential building.

“(The images) reflect the established process of using a herbicide to kill off the rough and spraying the fairway to control weeds before harvesting turf,” she said.

“Because the greens and tees are no longer in use, they have also been sprayed.

“Our groundskeeper advises this practice has occurred often at Kingswood and is a regular part of golf course maintenance.”

But long-time golfer Michael Benjamin, who was a member at Kingswood for more than 20 years, said he had never seen poisoning on the rough part of the green.

“It was only ever mowed,” he said.

A Save Kingswood Golf Club Inc member took the recent photos of the golf course, and secretary Kevin Poulter described the stained land as an “environmental disaster”.

He questioned the implications of the chemical spray on wildlife and neighbouring residents.

The area is home to more than 20,000 trees and hundreds of native and protected ground-dwellers, including echidnas and snakes.

Mr Poulter said the animals would be killed or forced into some of the course’s 140 neighbouring residences.

“We were assured that any future plans would involve much more community consultation and had every reason to expect the flora and fauna would be well looked after … instead there is scandalous pillage and poisoning beyond belief,” he said.

“The developers have no current use for some greens and tees, so they have used scorched earth techniques to wipe out the course … the government and council should act immediately to stop all this deharvestation and destruction.”

ISPT said October was the “optimal” time of year to get the “job” done otherwise it would have to source more rough cutters which would make the task more difficult.

“We are bound to maintain the condition of the course and to keep up the usual maintenance processes in doing so,” she said.