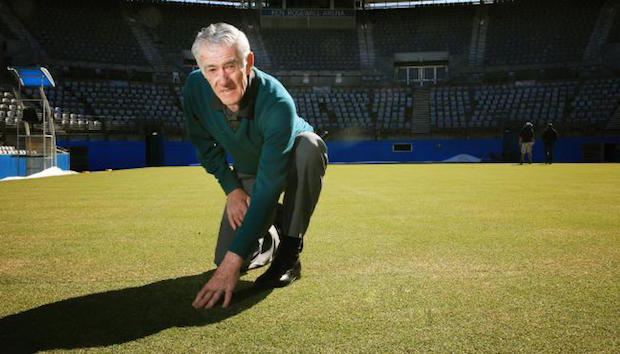 Ken Rosewall will never forget his four Davis Cup titles for Australia on the iconic green grass. Now 81, Rosewall regularly reminisces about his success on the international tennis stage.

Sitting in the Ken Rosewall arena on Friday, a stadium named in his honour, all these memories came flooding back to the legend of Australian tennis.

Much to Rosewall’s delight, the Olympic Park venue in Homebush will host the Davis Cup Play-off tie between Australia and Slovakia from September 16 to 18.

It will be the first Davis Cup in Sydney since 2011 when the Royal Golf Club in Rose Bay hosted a World Group Play-off between Australia and Switzerland.

For Rosewall though, it’s all about the return of the hallowed green grass to the Harbour City.

“I’m pretty excited about it,” Rosewall told The Saturday Telegraph.

“It’s nice to think we are having a Davis Cup here at the tennis centre in Sydney.

“I was certainly honoured and privileged that the centre was named after me and I never thought we’d have a Davis Cup played here.

“I’m born and bred in Sydney, but there are a lot of players deserving of this as well.

“So I feel like I’m representing all of the players that have performed in Davis Cup competition — we are all in this together.

“But to be here and witness a Davis Cup match under these conditions with a perfect grass court, it’s going to be really exciting for me and certainly something to remember.”

The Davis Cup has significantly changed since Rosewall last graced the court in the late 1970s.

He has fond memories of 35 countries competing for the title — now it’s a playoff between 130 nations.

Despite the differences, Rosewall expects Australia’s long-running affiliation with the green grass to remain.

He also stressed the importance of defeating Slovakia to maintain their status on the world stage.

“I’m sure the players will enjoy playing on the surface,” he said.

“This is our strongest group, so it looks good for our Davis Cup performance.

“It’s an important match for Australia to win because it will keep us in the top group and will give us a chance to win the Cup next year.

“If we lose we go down a division, so that’s where it’s important to have a winning result.”

Rosewall has no doubts Australia will perform strongly, especially with Lleyton Hewitt on board as team captain.

“I think Lleyton’s enthusiasm for Davis Cup and any other competition is going to relate to how the players react and perform,” he said.

Hewitt will be joined in Sydney by Nick Kyrgios and Bernard Tomic for the crucial Davis Cup tie against Slovakia.