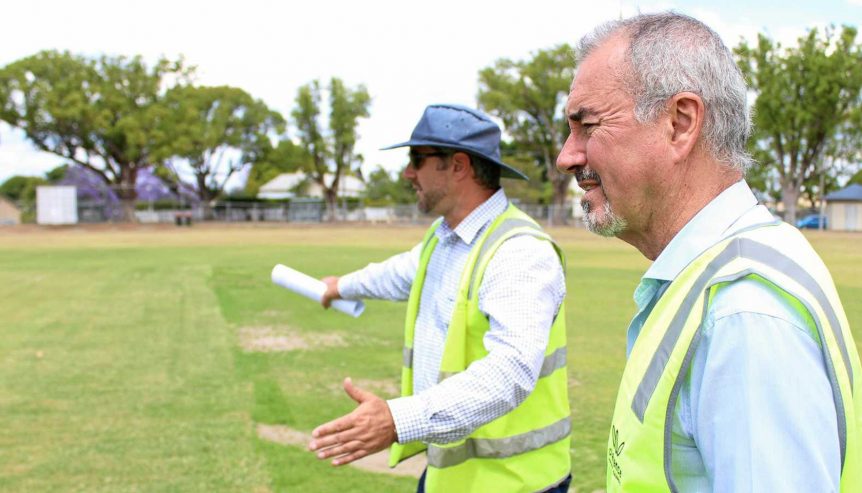 The secret behind the famous slope on the Ellem Oval wicket has been revealed.

It was another three wickets.

Mr Sutton said they had excavated 400mm deep to remove the old surface which was then refilled with “a sandwich” of materials including layers of road base, drainage material, levelling sand and black sand to build the new wicket.

On a site inspection with Clarence MP Chris Gulaptis and other council staff, Mayor Jim Simmons said the historic slope had been in need of fixing for many years and the re-development would bring the ground up to a proper standard.

“It will be a fantastic improvement especially with a flat deck,” he said.

“There have been other turf wickets on the Lower Clarence that have been better standard and Ellem Oval deserves to be a top quality wicket.”

Mr Simmons said there wouldn’t be too much of change to the nature of the surface was confident the pitch wouldn’t turn out like something akin to the famed WACA wicket.

“Clarence cricket is pretty lucky in that we have really good curators, Scully Blanch has been doing the wickets here in Grafton for a long long time and he is pretty good at it,” he said.

“Generally we would hope for a good batting wicket.”

Now the grass had been re-laid, the long process of rolling it down to create the pitch had begun and council were confident it would be ready for the end of the cricket season in February.