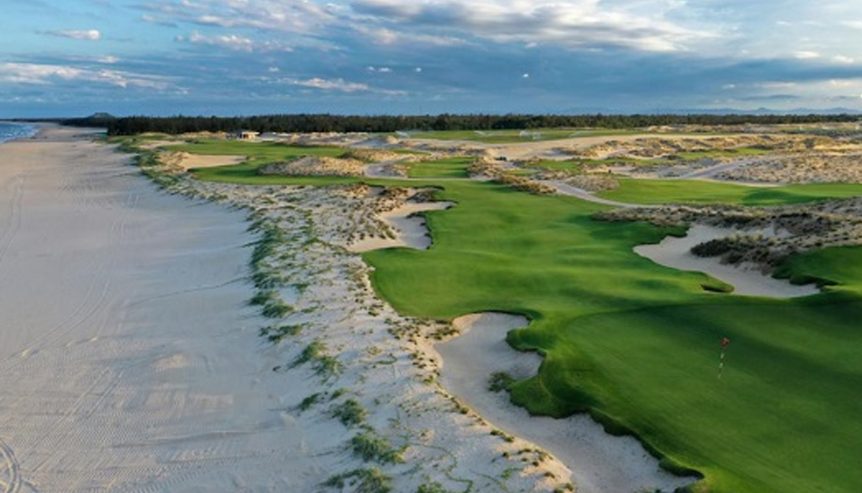 The golf course will be the first facility within the new Hoiana Integrated Resort to welcome the public.

The 985-hectare, US$4 billion Hoiana complex is the most ambitious resort development ever undertaken in Vietnam. Its first operational phase, which is nearing completion, will eventually integrate more than 1,000 rooms, suites and villas (managed by Rosewood Hotel Group), four kilometres of pristine beach, a suite of beachside pools and restaurants, a stand-alone beach club, an entertainment facility managed by Suncity Group, and a wide array of retail partners.

“Hoiana Shores Golf Club will indeed be the first component of this larger development welcoming both domestic and international tourism to our shores,” said Steve Wolstenholme, Group Chief Operating Officer at Hoiana. “As a Group we intend to showcase the vibrancy and economic potential of not only Hoi An and Central Vietnam but this region in general.”

“It all starts with the golf,” said Ben Styles, Vice President of Golf for Hoiana, a Golf Course Facility Member of the Asian Golf Industry Federation. “And so we are particularly excited to announce that Hoiana Shores Golf Club will welcome its first golfers from September 23. The Grand Opening event will occur in early 2020, in concert with the unveiling of other Hoiana Phase 1 facilities.”

Until that time, the newest golf course in Vietnam – arguably the most active course development market in the world – will be available for limited ‘preview play’, whereby all proceeds from visiting golfers will be donated to local charities.

“It’s our intention to further highlight the ability of golf and tourism to benefit a community,” Styles said. “Starting September 23, those proceeds will benefit our local community directly.

“Golf occupies a very exciting place in Vietnam right now and I’m so proud and honoured to be a small part of the development and evolution of the game here. What we have tried to achieve at Hoiana Shores Golf Club – with help from the design team at Robert Trent Jones II – is something specific and nuanced: a traditional links that proudly builds on local traditions, which, if we are honest, is what all great golf courses do.”

Come September, visiting golfers will notice no flags flapping in the ever-present, seaside breeze at Hoiana Shores. The pins will instead be adorned with red lanterns, the likes of which illuminate Hoi An’s famous Old Town at night. “There’s a reason why it’s called The City of Lanterns,” Styles said.

Hoiana Shores Golf Club began construction since late 2017, under direction of experienced, Hong Kong-based course builder Linksshape, led by Australian, Stuart Stone. “It’s been an amazing experience to be entrusted with this extraordinary piece of land,” Stone said. “Almost the dictionary definition of what ‘linksland’ should be.”

Hoiana Shores has also been developed in full accordance with strict sustainability principles laid out by the UK-based GEO Foundation. “In Southeast Asia, there are no other golf developments at this stage of construction that are going through this programme,” said GEO Executive Director Sam Thomas. “All others are in the planning or design stage. I think it’s fair to say that, if they continue on this path, Hoiana Shores will be first past the post, the market leader in this regard.”

While the greens at Hoiana Shores are grassed with Tif-Eagle Bermuda, all the fairways and tees feature Zeon Zoysia, a relatively new, drought-tolerant turfgrass strain specially developed to provide firm, fast conditions in equatorial regions like this one. This choice was both sustainable and strategic. Many ‘tropical links’ are built entirely on sand; several more feature the flamboyant contour associated with links golf – but few, if any, have delivered the requisite bounce and roll that links design requires. Zeon Zoysia will, which is something of a game-changer.

“It’s an upright grower where you can cut back on water and get it right – firm and fast,” said Rob Weiks, Golf Course Superintendent at Hoiana Shores. “It’s less grainy than Bermuda, way less than the paspalum. It frankly freed up the architects and shapers to manufacture some wonderful shapes and contours – a lot of created architecture that could not be rushed. It is a great luxury to pile the sand up, shape it, then let the wind shape it again. It’s one reason the landforms out here are so compelling.”

Stone added: “Let me give you an example of how that process worked, because it’s pretty unique and required real patience. On holes 16 and 17, for example, where the wind is coming right off the sea, our fine shapers carved out the shapes, and then we let Mother Nature further shape it. Then the team came back, refined it and finalised it. Ultimately, we created truly windswept areas there that were quite different from the original shapes.”

Six of the 18 holes at Hoiana Shores come into direct contact with the beach. According to Styles, this illustrates both Hoiana’s vision and ambition. He said: “It speaks volumes about our ownership Group – to allow so much interaction with the shoreline. That’s a rarity. The beachfront could have been otherwise developed.

“But this decision will ultimately pay off, as this part of the course is uniquely unforgettable. There is nothing quite like playing those holes – playing shots from the beach itself! It is proof you are playing a proper links. There aren’t many courses in Asia that serve up that type of experience.”