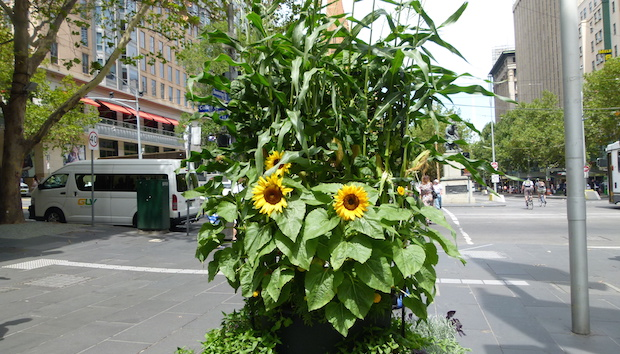 Growing your own fruit, veggies and herbs is a great idea in theory – but sometimes it’s hard to know where to start.

Helen Tuton is Serco’s Horticultual Assets Supervisor for the City of Melbourne, and a black belt in gardening.

She was answering questions from Melbourne’s humble home gardeners earlier this month at the Grow Show, part of Melbourne’s Sustainable Living Festival.

We headed along to find out some awesome life hacks for small space gardening, fruit tree care and veggie patch basics.

Grow what you know:
While some fruits and vegetables may be in vogue, there’s no point planting them if you don’t know what to do with the end product.

“If you don’t know what to do with it, or how to eat it, put something else in that you are going to use.

Don’t put all your resources being your money, time and energy into growing something that you think you might use,” says Tuton.

“I’ve worked in gardens and nurseries for about 25 years and we never sold kale, all of a sudden a few years ago we were selling the seeds by the bucket load. I’m sure people grew monster big kale plants so they could say they were growing kale at home, and no one would know what to do with it.

We now know you just throw it in a smoothie or something, which is awful.”

Evergreens:
Remember when you were younger and wanted to grow your hair long and your Mum told you it has to be cut for it to grow? Well turns out she was right, and the same goes for evergreen trees.

“I always tell people when they plant evergreen fruit trees; don’t allow them to fruit in the first year. When you see the flowers start to come on get rid of them, because that plant is putting all of its valuable energy into making flowers and fruits, when it should be putting that into its roots to form a nice root system,” says Tuton.

“I know how hard that is. But it’s at your detriment; you will struggle to grow anything otherwise. The tree will be small and it won’t be vigorous.”

When it comes to deciduous varieties, A.K.A fruit trees that bloom in the spring and summer and go dormant in the cooler months, Tuton says it’s best to spend the first TWO years doing this. Savage.

“Fruit trees like apples, plums, pears and cherries, generally won’t bring any flowers on in the first year anyway, but it’s the next year you want to be a bit ruthless.”

Know your Nutrients”
Just like Calcium is good for our bones, and Vitamin C is good for our skin, plants take nutrients from an array of different things. If you are trying to grow fruit or veggies in your garden and find they get to a certain level of growing and then don’t quite ripen, Tuton says banana skins – packed with potassium- are the perfect remedy.

“Potassium is what those fruits need to get to the next level. Banana skins are full of potassium, and they will force that next wave of growth for your flowers and fruit. Just save the banana skin, chop it up and then just place them on the topsoil, it breaks down quickly, and that’s a really good source of potassium.”

So save those banana skins, people! And for those playing at home, here is a basic crash course in other nutrients your garden loves.

Say NO to Netting:
So many home gardeners think the solution to their bird or pest problem is to whack some cheap netting over their veggie patch, Tuton says there are better ways to prevent birds from getting your crops, and nets should be a last resort.

“The problem with netting and putting mesh over your garden is you’re excluding some of the really good stuff that would be getting in there.

If you watch a big veggie patch, there will be birds coming in and out of it all day, they might have a bit of a chew on some of the plants, but they’re also eating insects that we can’t even see. If you start netting, you’re excluding those birds from getting in and doing their jobs, you’re also running the risk that those birds are going to come in and get caught in that net, and they’ll die. You often get lizards and snakes caught in it too.

There are other ways to exclude birds from gardens, the way I do it in domestic gardens is with $2 shop plastic snakes, putting those in the garden stops the birds from coming in and kicking everything over, because to them they see it as a threat and will go somewhere else.”

If you are having trouble with possums, Tuton has a few pointers to help keep their little paws off your harvest too.

“Firstly, you can get an old pair of stockings, and put about a golf ball sized amount of powdered blood and bone into the toe, tie it up and hang them in the trees or areas that you know are being attacked by possums. To a possum, blood and bone smells like a dead possum, so it works by deterring them because they think it isn’t a safe place for them to be.

Possums are creatures of habit, we know that because they use the same trees, highways and fences and they’re on the same bit of roof every night, so we work with those habits. The smell of blood and bone wears off after about 7-10, so we want to take the stocking down and repeat this, we want to do it over about 3 weeks, by that time, that possum’s habit has been broken and it has gone somewhere else.”

“The other thing that works for possums if you’ve got them running up a tree or you’re out of blood and bone, if your fruit is all the way up the top, get Lapsang Souchong tea, it’s a very pungent Chinese herbal tea, you can just get it from the supermarket.

Boil it up like you would a normal pot of tea, and let it cool. Put it in a spray bottle and spray the fences or the trunks of the trees that they’re running up, or that bit of your deck that they’re running along. That smell to a possum is quite repulsive. Again, you will need to reapply that spray every 7 days, or after rain. After 3 to 4 weeks that habit will be broken again.”

Get more from your harvest:
If you are growing from seed, Helen says you have the opportunity to really pace out your harvest, and guarantee (provided you have good quality seed) a yield that lasts longer.

“The nice thing about growing from seed is you can pace out your harvest, with things like lettuces, spinach, silverbeet, tomatoes, we know if we plant it from seedling or cutting, they’re all going to do the exact same thing at the same time, so you will have thousands of cherry tomatoes for a three week period for example.

It also means you have time to remove those that haven’t worked out.”

Did you know you can RE-USE seeds? Crazy, isn’t it?! They are literally the gift that keeps giving. Helen explained how it works.

“I really like growing from seed and I think, if you buy the right seed you can collect it at the end of your harvest, dry it out, label it, store it and plant it next year,” she says.

“Even though your seeds might look dry, they’ve still got a fair bit of moisture in them, and you don’t want to store them if they’re still moist because they will just rot off. I just leave them to sit on the windowsill on some paper towel, and leave them for ages, as long as you can to make sure they’re definitely dry. When you’re ready put them in a paper bag or one of those little seed packets, label them and put them somewhere nice and dry that doesn’t get any humidity, happy days.”

We hope you found these tips useful! Now go out and get gardening!