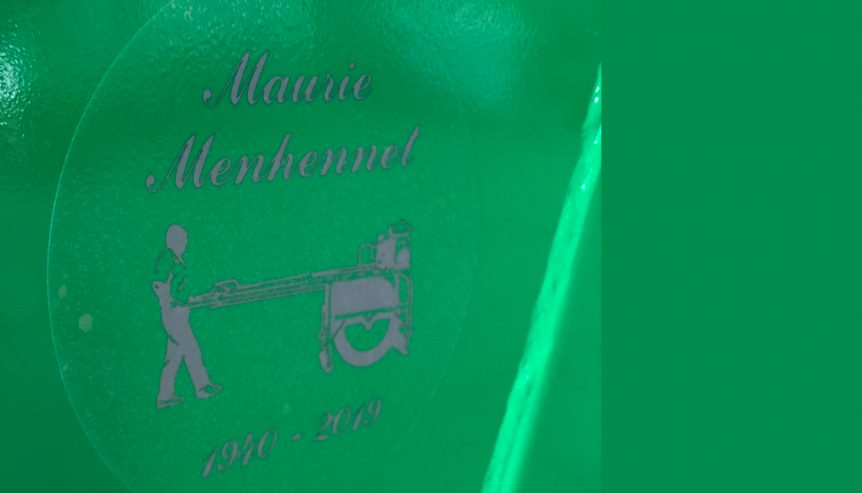 Maurice Menhennet was the brains behind Mentay cricket pitch rollers, and the industry was sad to learn of his passing at the end of last year.

To celebrate Maurice, Mentay are now producing rollers with a “commemorative Maurice sticker” on the side. Ballarat’s Eastern Oval are the lucky recipients of the first Mentay roller that has been manufactured since Maurice’s death.

turfmate spoke to Maureen, Maurice’s wife, about the new addition to the famous rollers.

“We wanted to do something to honour him, in memory of him, so it’s just a little sticker that will go on the side of every roller.

“We tossed around a few different ideas about what would be the best way to remember him and a sticker seemed to be the most logical idea – it’s simple and not all that noticeable really,” explains Maureen.

“There’ll be a lot of people out in the industry, particularly younger up-and-coming curators who would never have really met or known Maurice. To some of them it will probably be completely foreign, so we wanted it to be quite subtle and unless you were really looking for the sticker, you might not even see it. It’s just something to honour Maurice’s memory.”

Mentay produced their first roller in 1973 after spending years repairing other brands of rollers. Mentay founder, Maurice told the president of the Ballarat Cricket Association that he could build a cricket pitch roller far better than anything the club could currently buy – and so the challenge began that sparked the development of the first Mentay cricket pitch roller.

Today Mentay’s range of cricket pitch rollers has expanded and many are found are some of Australia’s most prestigious stadiums, such as the Melbourne Cricket Ground, and The Gabba in Brisbane. But Mentay’s reach is not limited to Australia – their cricket pitch rollers have also been exported overseas, the places including New Zealand, Hong Kong, Dubai and South Africa.

Visit Mentay’s website to learn more about the range of cricket pitch rollers on offer.