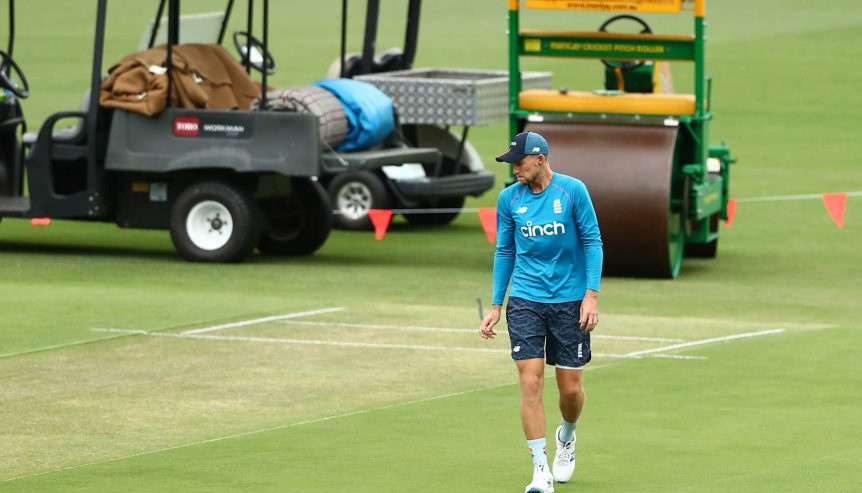 Gabba head curator David Sandurski admits he’s been struggling to sleep and has placed so many phone calls to Brisbane’s meteorology bureau in recent days they might justifiably consider some sort of intervention order.

But the man in charge of preparing the playing surface for Wednesday’s Vodafone Ashes Series opener is confident a weekend burst of the Sunshine State’s eponymous feature will ensure the Test pitch doesn’t replicate the one rolled out for last month’s seamer-dominated Marsh Sheffield Shield game.

And despite it sporting a generous mat of green grass today, neither England captain Joe Root nor Australia coach Justin Langer have thus far subjected Sandurski to scrutiny in the knowledge that fretting over pitches two days out from a match starting wastes valuable mental energy.

Root planned to cast an eye over the pitch during the course of England’s training session at the Gabba this afternoon, and cited uncertainty as to how it might play as a reason why he had yet to settle on a starting XI.

“We’ll see how it looks tomorrow and on the morning of the game,” Root said today when asked whether he might consider batting or bowling should the coin land in his favour on Wednesday morning.

“I’ve not got any clear idea on what we want to do as yet, we’ll try to leave that as late as possible.”

Sandurski, who concedes Brisbane’s big wet of recent weeks has made pitch preparation “really tricky”, offered a similar rationale as to why he was yet to discuss the likely character of his Gabba Test pitch with Langer.

“It’s probably a bit too early to come and have a chat,” Sandurski said today.

“It’s probably better on the afternoon before the game, or the morning of the game when you get a good idea of where the wicket’s really at.

“Even two days out, the wicket can change a lot … so probably closer to the game he’ll come and have a chat to me.”

The proximity to game day did not deter a number of Australia players from examining the pitch during their training run this morning, with interest doubtless piqued by weather patterns that dumped almost three times Brisbane’s November rainfall average (a total of almost 260mm) last month and more than 100mm in the past week.

While the Gabba is renowned for the speed and efficiency of its drainage, Sandurski said it’s been the absence of regular sunshine and drying winds that have hampered the usual pitch-hardening process and played havoc with his sleep.

However, last weekend’s welcome spell of drier, sunnier weather has him reassured the Test track won’t be a copy of the deck on which Queensland were skittled for 129 in 53.1 overs on day one of their recent Shield match against Western Australia.

“That one was an overcast preparation and match as well,” he said of the pitch on which WA’s Test squad member Jhye Richardson claimed 8-61 in his team’s seven-wicket win.

“The six days leading into that was a rain period, and the first three days of that game were also overcast.

“In an ideal world you’d have fine weather so you can do what you want to the wicket when you want to do it (but) without that wind and sun, you can’t get a rock-hard wicket.

“I expect (the Test pitch) to be a tad firmer and probably have a tad less in it than that (Shield) one, but pretty similar.

“The new ball is always the key, that first 20 overs – if you’re none or one-for instead of three or four down, it has a big bearing on how you’ll go throughout the match.”

Brisbane’s forecast shows the potential for light showers on match eve, and the possibility of storms and some heavy cloud on at least the first two days of the Test.

Root said prior to England’s penultimate pre-Ashes training session today that the mystery surrounding his team’s line-up had nothing to do with gamesmanship after his rival skipper Pat Cummins went public with Australia’s starting XI yesterday.

“I’m not into mind games, I’m just not in a position right now to name our team,” Root said.

“They (Australia) have gone out there and named their eleven, it doesn’t really concern me or change anything from our perspective.

“We’ll go about it how we want to, and we’ll let you know when we’re ready.

“We’re close to it, but I don’t feel comfortable revealing anything at this stage.”