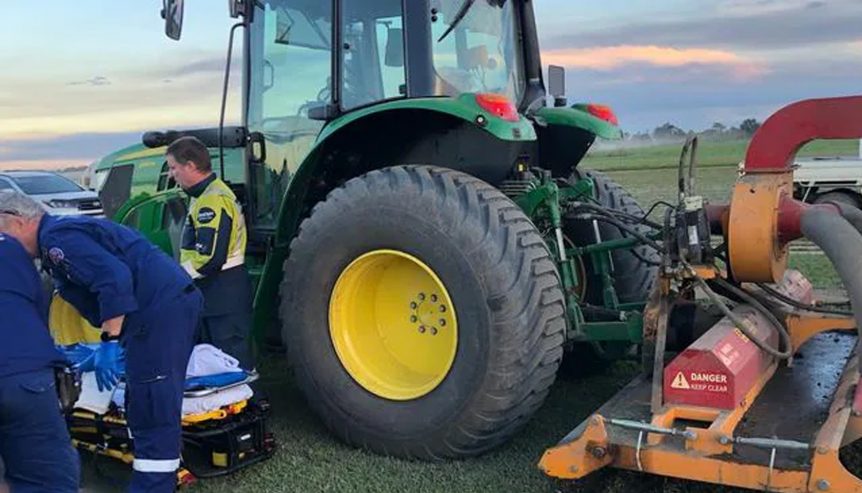 A “highly distressed” man has been airlifted to hospital by helicopter from a rural town outside of Sydney after accidentally amputating his own leg in a lawnmower accident.

The 56-year-old was using an industrial lawnmower on a tractor at Wilberforce on Monday when he suffered a mishap that resulted in him cutting off his lower leg.

Wilberforce is located 40km northwest of Sydney on the Hawkesbury River.

NSW Ambulance called in CareFlight’s Rapid Response Helicopter at 4:25pm and the crew had just four minutes to be in the air after receiving the call.

The chopper arrived at the scene just after 4.45pm, where NSW Ambulance paramedics were treating the man.

A man amputated his own leg with a lawnmower. Picture: supplied CareFlightSource:News Corp Australia

The 56-year-old was placed into a medically-induced coma and airlifted to hospital.
Picture: supplied CareFlightSource:News Corp Australia

Images from the scene show a John Deere tractor with a mowing attachment on the back of the vehicle at a rural property.

A CareFlight specialist doctor and a NSW Ambulance critical care paramedic then performed a clinical assessment on the patient.

The crews used an ultrasound and provided further treatment for the wound.

The clinical team then intubated the patient and placed him in an induced coma to stabilise his condition.