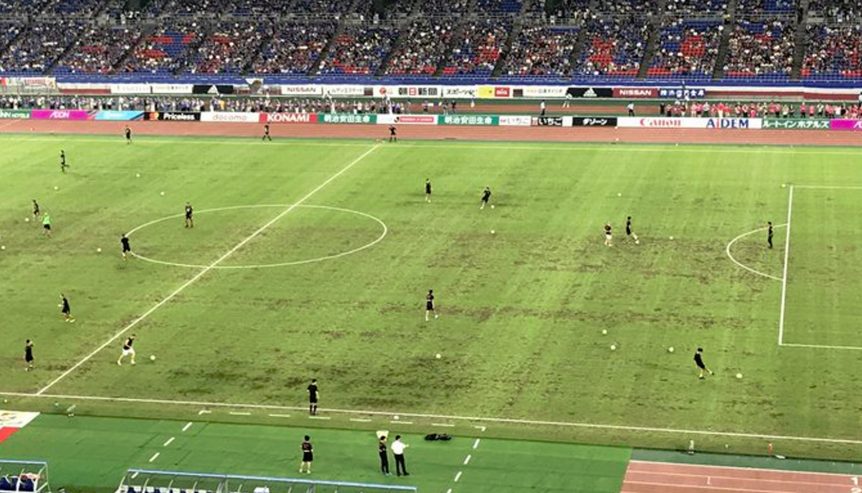 But the venue for this year’s Rugby World Cup final did not have even a blade of grass on it when it was stripped bare and re-laid just a month out from hosting its first match of the tournament.

The pitch at Nissan Stadium, to be known as International Stadium Yokohama for the duration of the tournament, was in a sorry state when it hosted its final match in Japan’s top-tier football competition – the J1 League – prior to a six-week spell as a rugby venue.

An abnormally long rainy season in Japan’s Kanto region, 30 days longer than that experienced in 2018, has meant little sunlight for the Yokohama grass and resulted in a harsh environment for the natural sprouts within the hybrid turf to grow.

The uncharacteristically overcast July, coupled with poor ventilation inside the 80,000-seater stadium, led to concerns over whether the pitch would be ready for that start of the tournament and a decision was taken by Yokohama City and tournament organisers to re-lay the turf just last week.

They remain, however, comfortable with the timeframe for the new turf to bed in. “With Yokohama we have planned and prepared for the transition from football to rugby and are confident that the playing surface will be in peak condition,” tournament organisers said. “An integral part of our planning has been the monitoring and analysis of the transition between summer and winter grass types to ensure that the transition in 2019 is managed as optimally as possible.”

Yokohama is one of five host venues with hybrid turf, along with Kobe, Kamaishi and the venues for two quarter-finals, Oita and Tokyo. Hybrid turf combines natural grass with a small quantity of artificial grass, usually around 3% – in line with major sports competitions regulations – for a stronger and more durable pitch than that consisting of 100% natural turf.

Weather has not been kind to Japan as it gears up to host Asia’s first Rugby World Cup. Meteorological records tumbled in Tokyo this summer as the capital experienced 20 consecutive days of three hours or less of sunlight, the such longest sequence since records began in 1961.

“With more than 2,000 kilometres separating Sapporo in the north and Kumamoto in the south, the seasonal variation across Japan brings added complexity,” organisers added. “We are prepared and ready to provide a natural, sustainable playing surface and are confident that the turf at all venues will be in peak condition for the tournament.

“All stadia and pitches will be in a condition befitting Rugby World Cup. The organising committee and World Rugby have been working closely with leading global turf experts since 2015 to ensure optimal conditions.”